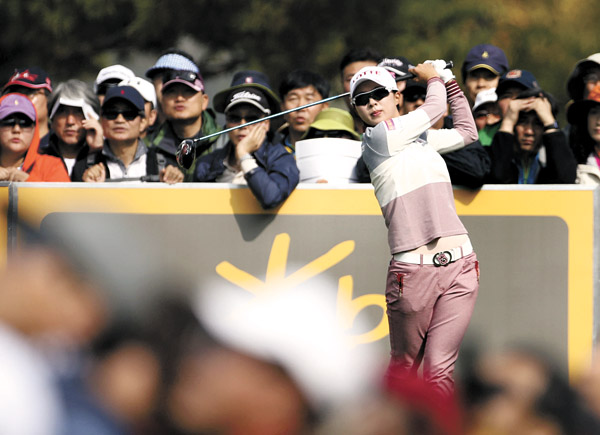 Kim Hyo-joo tees off at the second hole in the final round of the KLPGA KB Star Championship yesterday at the Namchon Country Club in Gwangju, Gyeonggi. She won her third KLPGA major title at the last major competition of this year’s tour. [NEWS1]


Kim Hyo-joo, who won the LPGA Evian Championship in France in September with the course record of 10-under 61 in the first round, achieved her fifth KLPGA title and third major title yesterday by winning the tour’s last major competition, the KB Star Championship, with 12-under 276 shots.

Kim was followed by Park In-bee (277), Baek Kyu-jung (276) and Heo Yoon-kyung (279). Heo stayed in first place until the third round, but her two-over 74 shots yesterday cost her the victory.

The 19-year-old champion also set a record by winning her third KLPGA major title yesterday. She won the Kia Korea Women’s Open in June and the Hite Jinro Championship earlier this month. The third win made her the country’s second female golfer to win three KLPGA major titles in a season after Shin Ji-yai in 2008.

She also won prize money of 140 million won ($132,431) and became the tour’s money leader this year regardless of the remaining five competitions, adding to her existing billion won in prize earnings.

Kim began the final round in second place but scored a birdie in the first hole and tied with Heo, who made a bogey on the same hole.

Kim also had a bogey in the fourth hole and finished the first half with even par.