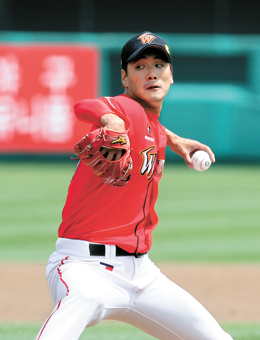 SK yesterday said it will hold a press conference at SKT Tower located in Jongno District, central Seoul, tomorrow that will be attended by SK President Lim Won-il and General Manager Min Kyung-sam to announce that SK agreed to make Kim eligible for the posting system and will support his effort to play in the United States.

Kim had said he wants an opportunity to go to foreign clubs as soon as possible.

“I want to give Major League Baseball a shot through the posting system if I can meet the requirement,” he said at the Media Day event before the season.

“We also want one of our players to advance to Major League Baseball or the Japanese professional baseball league,” said club owner Choi Jang-won at the club’s kickoff meeting of this year.

In the Korea Baseball Organization, players become free agents after nine years, and they are allowed to move to foreign leagues two years earlier if their clubs agree.

The clubs put them up for the posting system and accept closed bids from foreign teams. To meet the requirement for free agency, players need to stay on a KBO team’s active roster for an average of 145 days per season, which lasts about 200 days. For seven years, that would be a total of 1,015 days.

Kim was drafted by SK in 2007, but was short of the full seven seasons as he suffered injuries in 2011 and 2012. But he was selected for the national team for the Incheon Asian Games, which added six days, and was credited with an additional eight days when the team ended up winning the gold medal.

Slowed by injuries to his left shoulder, Kim won only four games in 2011 and eight in 2012. He returned to form by winning 10 games last season and 13 this year, which was good for fourth in the league. His 3.42 ERA was second best. Kim also had 145 strikeouts, to rank fifth.