A box from Korea’s Goryeo Dynasty (918-1392) was on display at the Aichi Prefectural Ceramic Museum in Japan until yesterday. The box was designed using the changgeum technique, in which drawings are carved on lacquered surfaces and gilt or gold dust is used to fill in the lines. [JoongAng Ilbo]


When news broke in July that a box decorated in mother of pearl, or Nacre, from Korea’s Goryeo Dynasty (918-1392) was coming here from Japan, Koreans were thrilled.

The enthusiasm was understandable, because the box, from the latter half of the Goryeo period that was used to keep the Buddhist sutra, a religious text, is not only beautiful to look at but extremely rare. Despite being one of Korea’s best relics, none were housed in the country until that box was donated to the National Museum of Korea. Experts say there are only 16 Goryeo-era lacquerware in the world, eight of which are for storing sutra.

Last week, Korean media got a look at a lacquered box from Goryeo, this time as a featured artifact in the Japanese exhibition “Korean Crafts from Koryo and Choson Dynasties: Ceramic and Lacquerware and Metalware,” which was hosted at the Aichi Prefectural Ceramic Museum and wrapped on Sunday. The octagonal box was intricately decorated in mother of pearl and was even featured on the show’s promotional poster.

Peony blossoms and vine designs, created with mother of pearl and gold, stand against a black lacquer background. 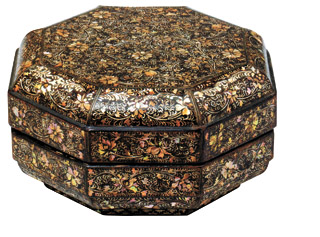 This octagonal lacquered box from the Goryeo Dynasty was on display at the Aichi Prefectural Ceramic Museum in Japan. Korean experts say lacquered boxes that are octagonally shaped are extremely rare.

Lacquered boxes in octagonal shapes are extremely rare and the attention to detail on this box was stunning.

The museum states in its catalogue that the piece originates from the late 14th century and shows the transition of lacquer craftsmanship from the Goryeo to the Joseon Dynasty (1392-1910).

Experts say sophisticated technique is seen in lacquerware from the Goryeo period, as well as a high aesthetic. In fact, mother of pearl craftwork was often presented by Goryeo royalty as official gifts to foreign dignitaries, according to history documents. Some are known to be in museums in Japan, the United States and the United Kingdom.

Another box from Goryeo at the exhibition in the Aichi museum shows the changgeum technique, which originated in China, where artisans would carve drawings on the lacquered surfaces and use gilt or gold dust on carved lines and spaces to decorate the pieces. Buddhist paintings from Goryeo show these containers, though one has not been seen in the modern era.

The painting is in such good condition, observers say, that it almost looks fake. Like sutra boxes, Buddhist paintings from Goryeo are also some of the most appreciated Korean relics, but only 150 to 160 are know to exist worldwide - about 40 of them “Water-moon Avalokitesvara.” Korea has four.

Woo Chan-kyu, the head of Hakgojae Gallery in Samcheong-dong, Jongno, noted that these relics are appearing as key items at recognizable exhibitions in Japan.

“I hope through these exhibitions that Korean artifacts reach a wider audience and get appropriate attention,” he said, putting an end to under-appreciation at international art markets as well as the decline of the Korean antique business.