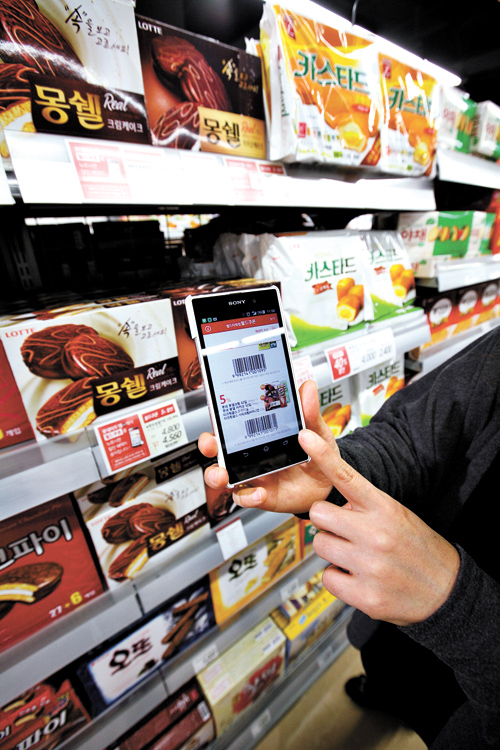 A Lotte Mart shopper receives notices of discounts and special offers over her smartphone through “beacons” technology. Provided by the company


There are a bevy of offers, discounts and consumer loyalty events out there, but consumers often fail to get them at the right time or place.

Lotte Group are trying to change that with a system called “beacons” at its discount supermarket, Lotte Mart.

Knowing their exact location, retailers can send real-time messages about specials, coupons, loyalty programs and other information to their smartphones.

The move is part of efforts to push omni-channel retailing, which is aimed at bridging the gap between online and offline stores.

Lotte Group started using beacons on Oct. 20 at Lotte Mart in the Lotte World Mall in Jamsil, southern Seoul. The company said it will extend the service to other branches later.

At the front door of the store, consumers can download or activate the Lotte Mart application on their smart device.

The company said it will provide discount coupons when users of the service enter certain sections or approach shelves carrying special-deal items.

“It is a really important task for us to set up an omni-channel system, because it holds the key to a better consumer experience,” said Song Seung-seon, head of the online marketing division at Lotte Mart. “Through the new service, we want to satisfy different types of consumers, especially those who do showrooming.”

Showrooming is the practice of checking out products in a store and then buying them online.

Beacon technology has been creating a buzz recently in the e-commerce and retail industry as an effective way to engage shoppers and collect consumer data.

Lotte’s use of beacons appears to be in the trial stage, while some overseas retailers and service providers are at a more sophisticated stage of deploying the technology.

Sayduck, a London-based company, launched an app using advanced augmented reality technology to bring catalogs to life. The app enables customers to see how products would look in their homes.

Beacons can also be paired with payment systems.

For example, online payment service PayPal unveiled PayPal Beacon in 2013 that is designed to let shoppers pay for merchandise in stores with a few taps on their phone and a PayPal account.

Beacons also help retailers collect consumer data by tracking the whereabouts of shoppers in stores and recording how long they spend in certain aisles.

Lotte says it will likely expand the beacons system according to the business strategy outlined by Chairman Shin Dong-bin.

Shin said in September that developing omni-channel retailing is of utmost importance to the company.

The group formed a special committee last month led by the chairman to create its new retailing strategy.