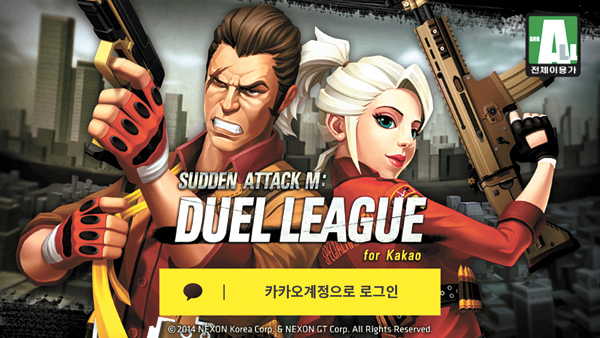 The popular first-person shooter (FPS) game “Sudden Attack” is now available on mobile devices. Nexon, Korea’s No. 1 game company, launched “Sudden Attack M: Dual League for Kakao” last Tuesday. The game was developed by its subsidiary Nexon GT and is currently available only on the Android operating system. The real-time multiplayer game allows for a maximum of six players and differentiates itself from other existing mobile FPS games.

When transferring the computer-based game to mobile, the developers focused on optimizing the user experience with mobile devices. Players are given two different options to control how their characters move sideways, jump and crouch. Both are very simple and intuitive. In one type, players use four different buttons for each motion and the other with a round keypad with arrows.

Shooting and aiming are both controlled by a button that operates differently, according to the weapon the character uses. For assault rifles, users can hold the button for multiple gunshots. The button also operates as the aim control for sniper rifles.

New players can learn about the controls through the tutorial when they play their first game. The tutorials can be played multiple times for those who are less confident in playing the mobile FPS game. The game continuously provides missions for users to complete, offering rewards to help new players get used to the system and encourage their play. 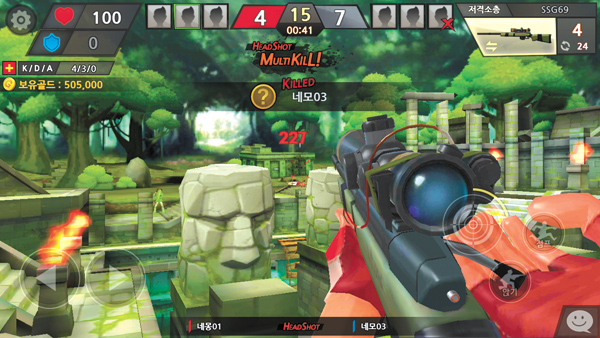 A screen shot of a user playing with a sniper rifle. Provided by the company

The graphics were also changed for the mobile version of the game. The game adopts cartoon rendering graphics, which creates a very different tone from the computer version’s very somber and realistic images. The three maps that are open to the users - Encounter, Temple and Sky Lounge - also have a vivid and cheerful mood compared to the often dark and gloomy images of the computer-based “Sudden Attack.” More maps will be updated gradually.

The game is connected to KakaoTalk, so players can enjoy the game with their friends. Users can choose to either play with or against their friends. Various play modes are available, from one-to-one individual matches to three-versus-three team matches. The company plans to update the clan system for a more diverse experience in the game.

Nexon is confident the game will be incredibly popular among users. More than 250,000 already signed up in a pre-order event earlier this month. The game’s closed beta testing last month received favorable reactions from the testers, according to the company.

“The testers gave positive responses on the game, especially on the colorful and light atmosphere and the impact feel of gun shots,” said a company official.