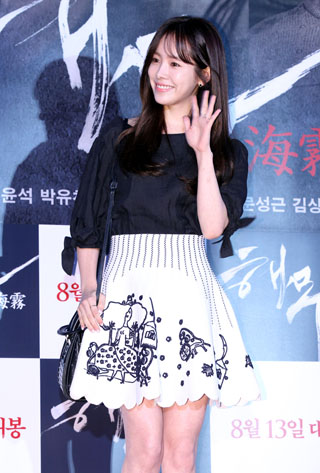 Actress Han Ji-min will reunite with actor Hyun Bin in the upcoming romantic comedy-drama series “Hyde, Jekyll and Me,” which will start airing in January.

The two paired up in the period film “The Fatal Encounter” earlier this year.

In the rom-com drama, Han will play Jang Ha-na, the team leader of a circus group working for a theme park called “Wonder Land.”

She opposes Ku Seo-jin (played by Hyun), the owner of the theme park, as he tries to scrap the circus show. Ku has everything from fame to fortune but distances himself from society after dealing with a tragic accident.

Jang eventually falls in love with Ku, who has two drastically different sides to his personality, just like Jekyll and Hyde.

The drama series is an adaptation of a popular webtoon of the same name.

It will be the 32-year-old actress’s first drama series in two and a half years after she filmed “Rooftop Prince” (2012).

The new drama series will be directed by Cho Young-kwang from “Queen of Ambition” (2013) and written by Kim Ji-wun from “Cheongdam-dong Alice” (2013).
By Sung So-young