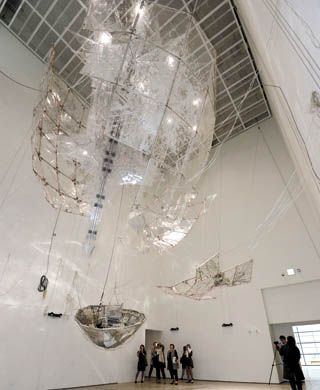 “Aubade III” by Korean artist Lee Bul is currently at the National Museum of Modern and Contemporary Art Seoul as part of the first “MMCA Hyundai Motor Series” exhibition, a 10-year program sponsored by Hyundai Motor Company to promote local artists in their 50s. [NEWSIS]

Since the French word “mecenat,” which means art patronage, suddenly became a buzzword in Korea around 20 years ago, corporate sponsorship of culture in the nation has rapidly increased, becoming more diverse as a result. The Korea JoongAng Daily is launching a series that profiles each major company’s ongoing cultural activities.

A large-scale installation currently hangs from the ceiling of a room at the National Museum of Modern and Contemporary Art (MMCA)’s central Seoul branch. The work, “Aubade III” by artist Lee Bul, is inspired by monuments and vehicles of the early 20th century such as the Hindenburg airship. At regular intervals it becomes surrounded by fog while its LED lights flicker.

The piece is part of the “MMCA Hyundai Motor Series 2014 - Lee Bul” exhibition, which runs through March 1. As the title suggests, the solo show by Lee, 50 - one of the best-known Koreans in the international art scene - is sponsored by Hyundai Motor Company, the nation’s biggest automaker.

“This is the first exhibition of the MMCA Hyundai Motor Series, a 10-year project that selects one artist per year and commissions them to hold a solo exhibition for several months at the museum,” explained Lee Dae-hyung, art director at the auto giant’s brand communication team. 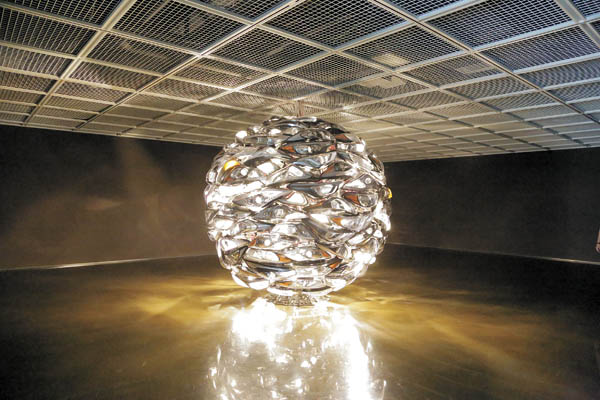 “URC-1” by artist Choe U-ram, which brings condensed energy from the beginning of the universe to life with shining auto headlights. It is included in “Dream Society” exhibition’s 2014 edition “Xbrid,” which is currently ongoing at Seoul Museum. The annual show is part of Hyundai Motor’s “Brilliant Art” project, a cultural sponsorship program. Provided by the museum

According to Lee, mainly artists in their 50s will be chosen as they have built up their careers enough to hold a retrospective and are able to be completely experimental as a result, detouring from their previous works in new projects.

“Not only artists of international fame like Lee Bul but also artists not widely known even in Korea can be selected, so that they should be promoted both here and overseas,” Lee added. “Hyundai Motor presented these rough guidelines but won’t intervene in the selection of the artists, which will be decided by judges that include MMCA curators.”

Beginning next week, nine creations by Korean-born artist Nam Jun Paik (1932-2006) will be on display at the Tate Modern in London.

The British art museum acquired the artwork with the support of Hyundai Motor.

“Often considered the founder of video art, Paik explored humanity’s ever-changing relationship with technology, from radio and television to robotics and computing,” the Tate said in a press release early this year.

“This acquisition is the first time the artist’s work has entered the Tate’s collection.”

The procurement of the pieces marks the start of a new 11-year partnership between Hyundai Motor and the Tate, both companies announced in January.

The most important element of the alliance is the Hyundai Commission for Turbine Hall, the Tate Modern’s iconic exhibition space. (The museum’s building was once a power plant.) 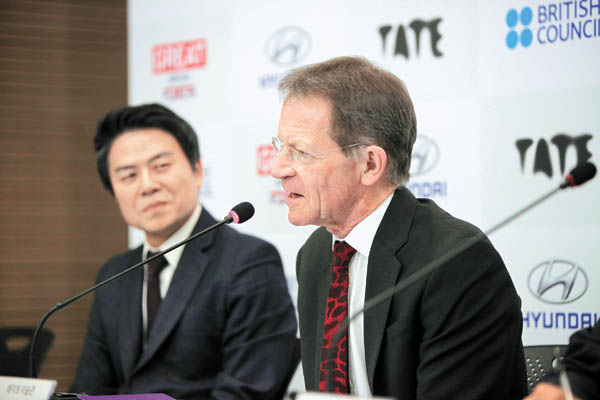 Nicholas Serota, director of the Tate, right, with Hyundai Motor CMO Cho Won-hong announces the Hyundai Commission for the Tate Modern’s Turbine Hall - slated to begin in 2015 - in a press conference in Seoul in March.

Since the institution opened in 2000, one contemporary artist per year has been commissioned to create and exhibit site-specific installations in the Turbine Hall. Pieces by artists such as French-American Louise Bourgeois, Indian Anish Kapoor, Danish-Icelandic Olafur Eliasson and Chinese Ai Weiwei created international sensation.

Hyundai Motor will sponsor the project from next year to 2025.

“This 11-year partnership is the longest initial commitment from a corporate sponsor that the Tate has ever received,” Nicholas Serota, the museum’s director, said in a media briefing at the Tate Modern in January. He also held a press conference at the British Council in central Seoul in March.

“Our partnership with Hyundai Motor is founded on a shared commitment to worldwide innovation,” he said. “This is reflected not only in the visitors Tate Modern receives from allover the world, but also in the Tate’s increasingly diverse programme and our many activities abroad.”

“At Hyundai, we understand that cars can provide much more than transportation,” said Chung Eui-sun, Hyundai Motor’s vice chairman, in the press briefing at the Tate. “They can connect with people emotionally and it is this feeling that connects people to great art. This is the nature of our partnership with Tate.”

Hyundai Motor’s cultural patronage projects, including the partnerships with the MMCA and the Tate, have characteristics that distinguish it from other Korean companies.

First of all, the automaker’s sponsorship focuses on contemporary art. 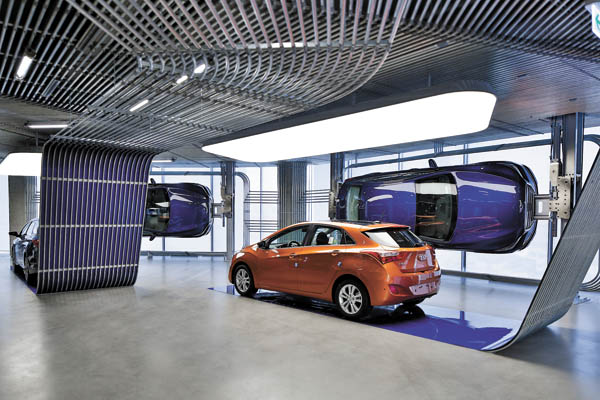 Hyundai Motor vehicles are displayed like art at Hyundai Motor Studio, which opened at the Dosan Crossroads in southern Seoul in May. The showroom, designed by architect Eulho Suh, uses unique decor such as pipe lines and interior details that point to the automaker’s identity. By Jeon Ho-seong

“It is the idea of Vice Chairman Chung that contemporary art’s all-inclusive nature and the convergence of art and technology in it are connected with the auto manufacturing, which has elements of visual art, design, music, architecture, and engineering,” art director Lee explained.

Lee, 40, who has been active as a prominent independent curator in Korea, joined Hyundai Motor last year - one of the car conglomerate’s most aggressive moves toward art patronage in the last few years.

The company began advancing in this direction in earnest in 2011, when it announced “Modern Premium” as its brand philosophy.

But as the nation’s second biggest conglomerate, Hyundai Motor’s initiative seems to have come late considering that other large companies have been operating their own art museums.

“It’s because of the characteristics of the automobile business,” Lee explained. “It runs in a long-term cycle. It requires at least five years of research to develop a new good vehicle model. Hyundai Motor focused on improving product quality. Now that it has achieved it to a certain level, it’s time to make the brand supreme quality.” 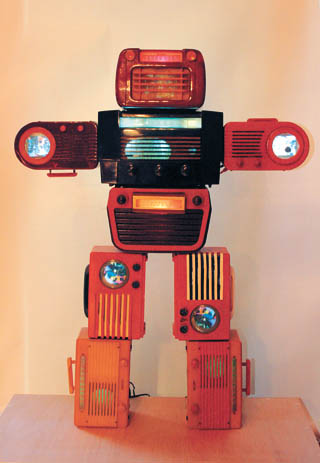 Nam June Paik’s “Bakelite Robot” (2002) is one of nine works by the Korean-born video art pioneer that were included in the U.K.’s Tate Modern’s collection with support of Hyundai Motor.Paik’s works will go on display at the museum from next week. Provided by the British Council in Korea

Lee also said the auto giant has more ambitious intentions regarding its art sponsorship projects in comparison with other local companies.

“Hyundai Motor has no plan to open its own art museum, because its goal is not to show the company’s art collection but to write a new art history over the next decade through the long-term partnerships with major museums of deep expertise in art,” he said. “Ultimately, the company intends to influence cultural backgrounds on which business decisions are made,”

According to Lee, Hyundai is focusing on “global art history” because markets outside of Korea account for 80 percent of its sales.

Lee added that Hyundai’s scheme “will help change global art history, which has been biased to Western art,” by pushing for more coverage of Korean and Asian art.

Hyundai Motor’s newest showroom also reflects the company’s interest in contemporary art. It opened in May at the Dosan Crossroads, one of the hottest areas in Gangnam, southern Seoul.

In the space, titled Hyundai Motor Studio Seoul, vehicles are displayed as if they are art, in harmony with unique decorations such as steel pipes and sheets.

“Together, they symbolize the process that Hyundai Motor cars are born from the steel produced by the group’s steelmaking subsidiary,” said architect Eulho Suh, who designed the showroom.

Contemporary art pieces inspired by automobiles are exhibited on its first floor and a small library of books about vehicles, art and design stand on the second. All floors, including levels three to five, which display cars, are open to the public.

The blogger Danggeun-mom, who visited the showroom in late August, wrote that her one-year-old child enjoyed riding the real automobiles on display while the writer, who majored in design, observed the interior details.

“Every detail, including the graphic art on the edges of emergency stairs which depicts wheel tracks, constitutes the company identity well,” she wrote.