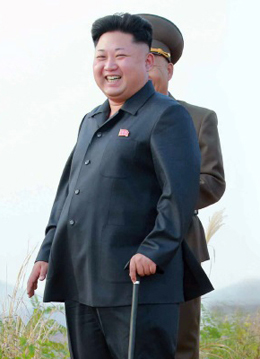 South Korea’s intelligence agency described some details of North Korean leader Kim Jong-un’s recent health woes, confirming that he is recovering from ankle surgery to remove a cyst. And it said there is a high risk of a relapse.

The National Intelligence Service underwent a National Assembly audit on Tuesday in a closed session and some of its answers to questions about the young ruler were later described to reporters by Representatives Lee Cheol-woo of the Saenuri Party and Shin Kyoung-min of the New Politics Alliance for Democracy.

According to the National Intelligence Service, a cyst was found on one of Kim Jong-un’s ankles in May. As the condition worsened, a group of doctors from Europe was invited to the North from early September to early October to examine him. They also concluded that Kim had tarsal tunnel syndrome, a pinched nerve that causes pain in the foot.

The foreign doctors operated on Kim to remove the cyst, the spy agency said. He is now using a cane for public activities.

After attending a concert on Sept. 3, Kim disappeared from public view for 40 days, prompting speculation in the outside world about his health and grip on power in the nuclear-armed communist regime.

He resumed public activities on Oct. 14 by visiting a scientists’ apartment complex. That’s when he was first photographed using a cane.

According to the National Intelligence Service, Kim is already suffering from aftereffects of the surgery. Because of his obesity and heavy smoking habit, there is a high risk of a relapse of the cyst, the spy agency told lawmakers on the Intelligence Committee.

North Korean doctors were also sent to Europe to learn how to treat Kim’s conditions, according to the intelligence service. Multiple photos of Kim were presented to explain his condition during the audit session.

The National Intelligence Service also told the lawmakers of a continuing reign of political terror by the young ruler.

A massive purge recently took place in the North to eliminate remaining loyalists of Jang Song-thaek, the once-powerful uncle of Kim who was executed last year for treason, according to the National Intelligence Service.

Some members of the North Korean leadership were executed by firing squad for singing songs with lyrics altered to ridicule Kim. About 10 Workers’ Party officials were also executed for taking bribes, watching South Korean TV dramas or infidelity.

Kim also demoted all the officers in one artillery corps for poor accuracy in artillery firing.

The reign of terror extended beyond the leadership and military to ordinary citizens, the agency said. Political prisons have been expanded and public executions took place more frequently, the intelligence service said.

As of now, five political prisons are operated in the North and about 100,000 people are believed to be jailed in them. Among them, the North is expanding the prison in Gilju, North Hamgyong, to a size 64 times larger than the 8.4 square kilometers (3.2 square miles) of Yeouido Island in Seoul, the intelligence authority said.

The National Intelligence Service believes that the expanded facility is intended to house prisoners to be relocated from Yodok Concentration Camp in South Hamgyong, which is well-known in the international community for its brutal human rights violations.

Because the international community pays attention to the Yodok Prison, Pyongyang appeared to be planning to move prisoners to the expanded facility in Gilju, the National Intelligence Service said.

According to the briefing, about 50,000 are working in Russia, China and Kuwait, up from 26,000 in 2010. They are forced to surrender up to 90 percent of their wages to the North Korean government.