A hairstylist to the stars goes from rags to riches

A hairstylist to the stars goes from rags to riches 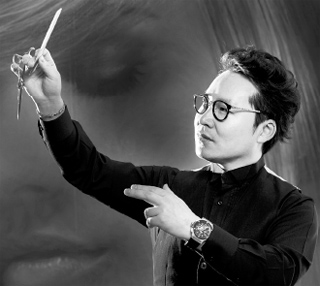 What’s the secret to his success as a hairstylist?

“I treat all of my customers as if they are my girlfriends,” said Kim Hyun-tae, the CEO of the beauty salon Ra Beauty Core, whose clientele ranges from women at leading businesses to high-profile celebrities.

Today Kim is one of the nation’s most recognized stylists, and last month he was the only Korean hairstylist invited to lecture at L’Oreal’s business forum in Dubai. But that wasn’t always the case. As a child and a trainee, he struggled through poverty. But his hard work ethic allowed him to become a self-made man.

After his father’s business fell apart, he was raised by his grandmother in Incheon. But by the time he entered elementary school, the family was so destitute that he was forced to get a job. “I started off picking up arrows at a national archery center and from then on, I’ve done most part-time jobs imaginable,” Kim said.

After graduating from middle school, he worked as a DJ, but it was when he saw a hairstylist working through the window of a beauty salon that he decided to change his path.

He was eventually hired at a hair salon in Incheon, where he took home a meager wage.

“Because I had no money, I only ate the lunch that was given for free at the beauty salon throughout the entire day,” Kim said. “But even under those circumstances, I had so much fun at work that I didn’t realize how hard it was.”

However, not long after, his ambitions started to grow. Desiring to play in the big leagues, he left his job in Incheon and moved to Seoul. At the time, the hottest place to be was in Apgujeong, Gangnam District.

The work was excruciating, and Kim worked every day from 6 a.m. until midnight.

But just six years after getting a foothold in the industry, Kim became a star stylist. His reputation grew and his annual earnings surged to 200 million won ($187,000) a year as top female celebrities flocked to his salon. So in 2003, he decided to fly solo and started his own independent beauty company.

“With the popularity of the Korean wave, K-style is grabbing the world’s attention, and soon a global brand like Vidal Sassoon or Toni & Guy will come over here,” he said.

Prospects for hair designers will be brighter in the future, he added.