7-foot-7 American is serious about his Ssireum

7-foot-7 American is serious about his Ssireum 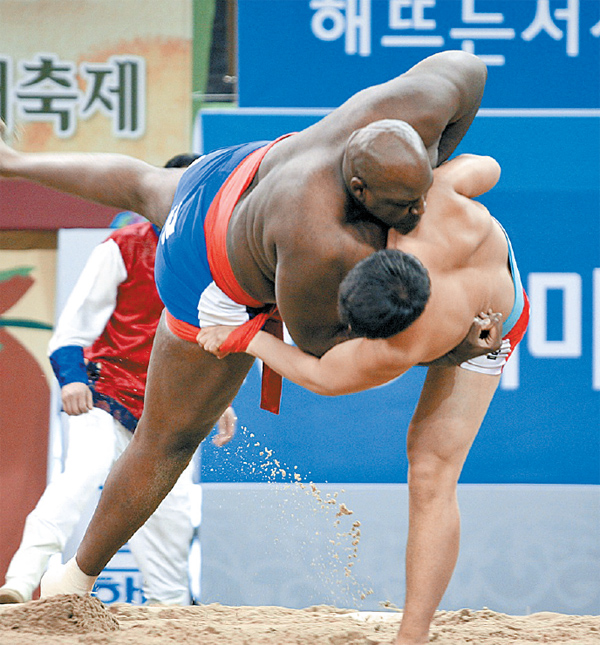 Curtis Johnson shows his stuff at the Korea Open Ssireum Festival last year in in Seosan, South Chungcheong. The American will compete in his fourth festival in Gimcheon this month.Provided by Korea Ssireum Association


Investment counselor Curtis Johnson made his fourth annual trip from New York to Korea earlier this month. The 7-foot-7 American is the tallest ssireum (Korean traditional wrestling) competitor in the world.

Johnson was a scholarship basketball player at St. John’s University in New York and later played in the semi-professional American Basketball Association, until ankle problems forced him to quit.

The 34-year-old had to use all of his annual vacation time plus unpaid leave to spend six weeks in Korea this year, but he doesn’t regret it. While staying in Korea, he is training for the 2014 Korea Open Ssireum Festival in Gimcheon later this month.

“I recently practiced with ssireum athletes of Gumi City Hall,” said Johnson, during a visit to Jeju to watch the National Sports Festival last week. “I’m glad to be back because it is hard to find decent sparring partners back in the States. But there are plenty of great players to practice with in Korea.” 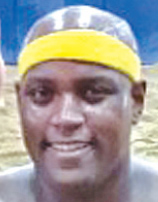 When asked why he went to Jeju, Johnson said, “I wanted to watch highest-level matches with my own eyes. I’m also trying to get used to the skills I have learned by watching competitors of different levels and age groups.”

Johnson already is famous in Korea. Every time he comes, he appears on several TV programs, one of the reasons why he arrived about a month earlier than usual this year. He recently was urged to join an entertainment management company.

Johnson started ssireum in 2010, when he participated in a competition in New Jersey. Soon, he was mesmerized by the dynamics and skills of Korean wrestling and began taking occasional lessons. Nine months later, he managed to win the New York Strongman Ssireum Competition.

He has been flying to Korea since 2011 for the annual ssireum festival. In 2011 and 2012, the American was eliminated in the preliminaries. Last year, he advanced to the round of 64 and won third place in the foreigner competition.

“Ssireum is great because it is polite and scientific,” said Johnson. “It is a courtesy for a winner to give a hand to help the loser stand up in sirreum, and I have never seen such an act in any other sport, such as basketball, American football and baseball.”

On Oct. 24, Johnson visited Enerlife team manager Lee Bong-geol, a ssireum legend, who is hospitalized in Daejeon after back surgery.

“I had hard time lowering my weight balance and Lee advised me to lift the opponent to break his balance instead,” said Johnson. “In return, I paid for his hospital bills with the money I earned from TV programs.”

Johnson will take part in his fourth national ssireum competition this month. While in Korea, he has learned from ssireum legends Lee Jun-hee, 57, competition director of the Korea Ssireum Organization, and Lee Tae-hyeon, 38, a professor at Yong In University. One of the skills he practiced most was using active movement in his upper body to distract his opponent and then push him in a diagonal direction.

“I want to be a sensation,” said Johnson. “My goal this time is to make it to the round of eight in the national competition and to win the foreigners’ competition.

“I will do whatever it takes to make ssireum famous. I will work hard, never forgetting that I’m an honorary ambassador of ssireum.”