SME is engineering a return to its former glory

SME is engineering a return to its former glory 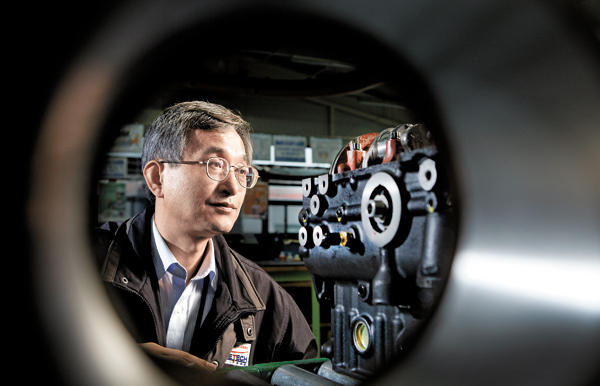 It’s not difficult to figure out what business Enginetech is in because the company’s name pretty much says it all.

However, instead of gasoline or diesel engines that we generally see from auto-parts makers, Enginetech develops engines and generators powered by natural gases.

The company, which is based in Hwaseong, Gyeonggi, has been through its fair share of ups and downs over the years, and founder and CEO Lee Yong-gyun admits he has learned some lessons the hard way.

But he says the future is bright for Enginetech due to the rising demand for natural gases as an alternative energy source to oil.

Lee, who was born in Hadong, South Gyeongsang, saw a potential niche market in engines when he decided to leave Kia Motors in 1999 after the Asian financial crisis. At Kia, which was Lee’s first workplace after graduating from Seoul National University, he was an engine development researcher.

When the automaker, now part of Hyundai Motor Group, was in a slump due to the financial crisis, the 51-year-old said he juggled the possibilities of either studying abroad or working at a foreign company. But in the end, he decided to establish his own business devoted to engines.

“Unlike in Europe, big Korean companies injected large amounts of capital to bring engine development technology from overseas in the beginning and this resulted in a small spectrum of engine types,” Lee said. “I found there was room to grow in engines using natural gases, which other corporations couldn’t do.”

Using his retirement pay from Kia, Lee established Enginetech in 1999, starting in a 33-square-meter (355-square-foot) office at the Korea Institute of Industrial Technology in Guro-dong, southern Seoul. A computer and one assistant were the company’s only assets in the beginning, but Enginetech quickly positioned itself as a solid player in building and testing engines, receiving research orders from local automakers and state-run institutions.

“To tell you the truth, there weren’t many difficulties in the early phase because as environmental regulations became stricter in the early 2000s, many companies gave us orders to study [engines],” Lee said.

In 2001, using facilities at the Korean Agency for Technology and Standards, the company started to develop its own technology for gas engines. Later, the company rented extra space at LS Cable’s factory in Gunpo, Gyeonggi, and acquired three engine dynamometers from Hyundai to boost development efforts.

Enginetech’s business started growing in 2006, when it began to replace diesel engines in light commercial vehicles and minivans with its own liquefied petroleum gas (LPG) engines after getting certification from the Ministry of Environment. In 2007, the company’s revenue reached 33 billion won ($31 million), more than double what the company was making in 2006. 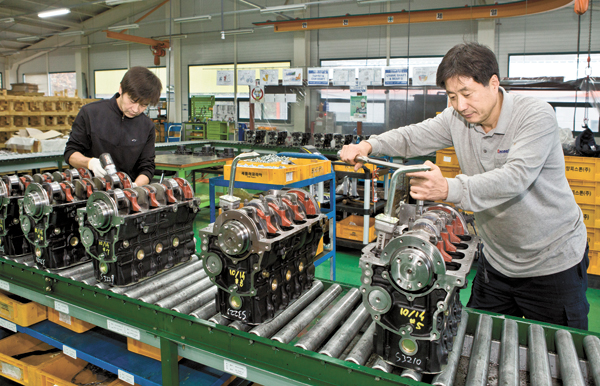 Employees of Enginetech assemble parts for gas heat pumps at the factory in Gyeonggi. Enginetech supplies GHPs to LG Electronics. By Park Sang-moon

After its own factory and research institute were completed in Hwaseong in 2008, it seemed that there would be only smooth roads ahead for Enginetech.

But it didn’t last. As competition in the diesel-to-LPG remodeling market became more intense and growth was limited, Enginetech felt its control slipping away after 2009.

“We made a successful launch of the business, but later we couldn’t react quickly enough to market changes and failed to deliver follow-up products,” Lee said. “As the company was run by engineers, who are experts in research but novices in finance, marketing and other management skills, it was difficult to catch up with the market’s situation.”

With annual revenue cut to one-third of what it was in Enginetech’s heyday, net losses started to pile up over the following three years, which eventually forced Enginetech to start restructuring.

Lee admits Enginetech is still recovering from that struggle. However, the CEO said revenues could hit 30 billion won ($27.9 million) next year as its new areas of business start to generate revenue.

Retrofitting LPG engines in place of diesels is no longer a cash cow for Enginetech. Today, the company’s lifeline is a gas heat pump (GHP) that is generally used for air conditioning systems in buildings. The product is currently supplied to LG Electronics.

“We supply 200 GHPs to LG Electronics per month,” said Lee. “The product will account for 70 percent of our total sales for this year, but the portion will drop as we are going to sell other products more.”

In addition to GHPs, the company is focusing on supplying gas engines for commercial vehicles. Lee said the company will start supplying engines for Hyundai Motor’s trucks in South America beginning next year.

The company also inked an engineering deal with Hyundai Heavy Industries recently and is working on a deal with Russia’s Gazprom, the world’s largest extractor of natural gas, after a meeting this month.

One of the reasons behind Enginetech’s recovery is the changing gas industry, which is now highlighted by a shale gas boom in the United States and by Russia trying to sell its gases to emerging markets in addition to Europe.

“As the gas market gets bigger, we will continue to grow,” Lee said. “I think saturation in the market is expected to come after 2020. Until then, we should prepare harder to grow. Whatever gas it is, whether it’s biogas or natural gas, what’s used for engines is pretty much the same.”

But in the automobile industry, which Enginetech relies on, electric vehicles (EV) that don’t need combustion engines are expected to be the next big development. Lee said he isn’t denying the trend of EVs, but said that their rise will be slow.

“While I think electric vehicles will take 3 percent of the market share by 2020, gas vehicles will take a 10 percent share in the automobile market,” he said. “Besides, the electric vehicle market is too difficult and crowded for small companies to enter. What we need is proper positioning in the market. And in the gas industry, there is a need for diverse products.”

Lee said that Enginetech is willing to work with companies in any country that uses gas. Currently, Enginetech is doing business in 10 countries and has its own branch in Thailand that was established in 2008.

“Many countries are changing their main energy sources to gas with the rising shale gas boom,” said Lee.

But in order for small companies like Enginetech to be able to expand overseas, Lee urged a support from financial institutions. He said that banks should pay more attention to companies’ business prospects and the potential of their technologies rather than securities.

“When we go overseas, financing is the most important factor, but I wish more banks would think the money they’re giving to promising businesses is not a loan, but an investment,” Lee said. “As the manufacturing industry is developing, I think our finance industry should be more supportive and should provide stepping stones to pursuing bigger and sustainable businesses.”