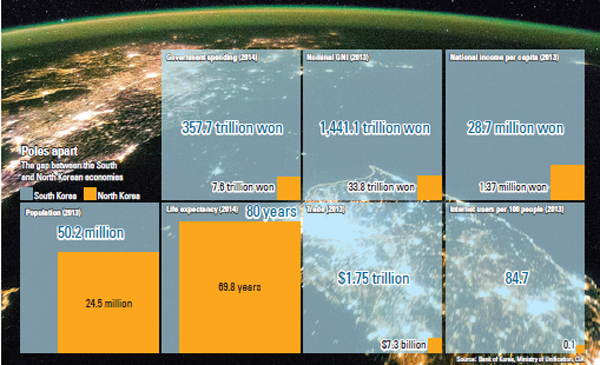 Since March, the government led by the Financial Services Commission (FSC) has researched the economic impact of reunification with North Korea.

The government is planning to come up with a contingency plan that is expected to be reflected in the unified financial policies that a joint task force by the FSC and the Ministry of Strategy and Finance is planning to announce next month.

The JoongAng Ilbo had access to some of the reports. Their highlights:

* Once the two Koreas are reunified, more than three million North Koreans will be unemployed. That’s roughly 30 percent of the 11 million to 12 million people who are believed to be actively participating in the North Korean economy today.

* The number of North Koreans allowed to come to the South should be limited after unification and gradually expanded.

* For privatization of commerce and industry, small and midsize companies and small-sized stores in the North should be sold to North Koreans. Additionally, state-owned farms and other types of land should be distributed to North Korean farmers for free.

The government and financial policymakers have been preparing a plan for economic and financial integration between the two Koreas in case of reunification after President Park Geun-hye stressed the issue at the beginning of the year.

In a New Year’s press conference at the beginning of this year, Park said reunification would be a “jackpot.” Two months later, on a trip to Dresden, Germany, she presented three main agenda items for unification: solving human rights issues, co-prosperity by building infrastructure designed to improve livelihoods, and integration of the two societies.

It was about this time that the FSC started to work on the reunification report. There is already a lot of research from both private and public institutions on the topic. But the report complied and prepared by the FSC stands out by focusing on economic integration - how it should be executed and the possible side effects. It could be used as a practical blueprint for reforming North Korea’s economic system. Other existing studies mostly focus on the cost of reunification.

The report proposes the marketization of labor, free pricing and privatization of property as foundations to changing North Korea’s economic system. According to the report, mass layoffs will sweep North Korea once the two Koreas are unified as many state-own companies are likely to collapse.

After unification, if salaries are raised to levels similar to South Korea’s, many North Korean companies will suffer and that will result in layoffs. Additionally, a massive cutback in the one million soldiers in the military will also fuel unemployment among young people.

A similar situation occurred when East and West Germany were unified. As East German workers’ wages spiked, there was unemployment of 3.2 million people, which was equivalent to 40 percent of Germany’s population at the time.

In just two months after the Berlin Wall fell, 180,000 people relocated from East to West Germany.

South Korea will also plunge into a chaotic situation if a mass exodus from the North occurs.

The report proposes that in the first three years of unification, only 200,000 people from North Korea should be allowed to relocate to the South.

Four to six years after unification, the number should be eased to 300,000, including students who attend schools in South Korea and those who wish to live with relatives in the South. Seven to 10 years after, the number will likely be expanded to one million.

The report said that to prevent fraud, properties that are privatized should be first offered to North Koreans and resale should be restricted. Financial support for North Koreans including higher interest rates on deposits was also proposed.

While there were no limits proposed on who could bid for large state-owned companies, small and midsize businesses should be offered to North Koreans first.

The plan to provide farmland to farmers for free is part of a broader plan to prevent people in rural areas from streaming into cities.

What stands out is that the South Korean government will be acknowledging already existing private ownership in North Korea today, recognizing the limited market economy reforms that have taken place.

In order to reduce the confusion that North Koreans may face in shifting to a market economy, free pricing on products should be limited to less than 50 percent of all products sold immediately after unification. That figure should be expanded to 80 percent within three years. Public utilities including rails, roads, energy as well as gasoline and rice should be subsidized.

The report also proposed that in the early stages of unification, the two countries should continue to use their separate currencies, which will be unified later.

North Korea’s currency, however, should be managed under a fixed exchange rate and a currency swap between North and South should be implemented.

To secure the funding needed for unification, the government is considering implementing an income tax as well as a value-added tax in North Korea while cutting back on North Korea’s defense budget.

“It takes roughly $500 billion to raise the average per capita income of North Koreans to $10,000,” said Kim Yong-beom, director general of financial policy bureau at the FSC.

Institutions differ on their estimates of the cost of unification. In a study released in 2010, Peter Beck, a researcher at Stanford University, estimated that reunification of the two Koreas would cost between $2 trillion and $5 trillion.