World Bank head sure of growth

World Bank head sure of growth 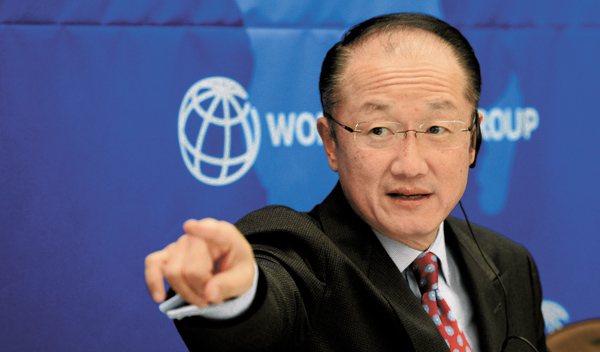 World Bank President Jim Yong Kim speaks during a press conference at the Korea Press Foundation in central Seoul yesterday. He emphasized that countries should not be too worried about the U.S. tapering because it is a sign of economic recovery. [NEWSIS]

World Bank President Jim Yong Kim said at a press conference in Seoul yesterday that countries should not be too worried about the U.S. tapering because it is a sign that the American economy is recovering.

“Many developing countries worry about the tapering of quantitative easing in the U.S., but they have to understand the reason why the bond buying is going down,” Kim said at an event held at the Korea Press Foundation in Gwanghwamun, central Seoul.

“It is a sign that the U.S. economy is getting better, and the Fed has announced well ahead of the time what it is going to be, so it has given enough time for countries to adjust.”

Kim visited Seoul to attend a symposium on educational innovation co-hosted by the World Bank and the Korean government.

As for the Korean economy, Kim’s outlook was highly optimistic.

“The good news is that we think the Korean economy will grow around 4 percent this year,” he said. “Compared to other OECD countries, this is very healthy and robust growth.”

He said that for much of the rest of the world, next year will be disappointing due to continued sluggish growth.

“Europe will grow less than 1 percent and there are still a lot of questions,” he said. “I think there is greater stability in southern Europe - Greece, Italy, the countries that we were most worried about. But now difficult decisions are being made. On one hand, fiscal consolidation is still needed. On the other hand, the economies need to grow.”

The European Central Bank will look for new plans to increase the region’s growth, including bond-buying, he said.

The World Bank head also responded to questions about the South Korean government’s contingency plan to prepare for unification of the two Koreas, using Myanmar as an example.

“Myanmar was isolated from the international community for a long time, but when they opened up to the IMF and World Bank, we were able to move quickly in providing support for everything from improving telephone services, health and education systems, to reforming government structures to be more open to foreign investment,” he explained.

“I think this is a very interesting model to be considered going forward.”

Although he underlined that the World Bank is not directly involved in talking specifics with the South Korean government, he said that “if there were opportunities, there would be many governments and multilateral development banks that would support North Korea prior to reunification.”