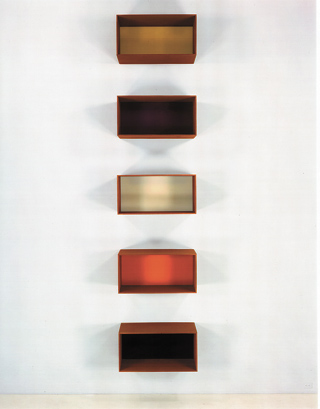 Donald Judd (1928-94) is one of the world’s most beloved postwar artists. But even those familiar with abstract art often find it difficult to discover meaning in his sculptures, as their geometric forms made of industrial materials such as steel and acrylic sheets make them look just like furniture pieces or boxes.

Thirteen of Judd’s works made between the 1970s to the 1990s, which are now on display at Kukje Gallery, also have such qualities. According to art critics, including Yoo Jin-sang,who attended the press preview of the show in Seoul last week, Judd created the works in an attempt to make abstract art three-dimensional while embracing space.

“Actual space is intrinsically more powerful and specific than paint on a flat surface,” Judd said in his 1964 essay “Specific Objects.”

This title is also what Judd called his works. He refused the label “minimalist,” which art critics of his time gave him.

“His works were not minimalist but maximalist,” said Flavin Judd, the artist’s son and the Judd Foundation’s head, at the press preview. “You’ll realize it’s about creating an entire space.”