In an era of e-readers, a street filled with small second-hand stores where books are piled from floor to ceiling is a rarity.

The old, battered signboards. Most were installed when the bookstores first opened during the 1960s. Provided by Naver 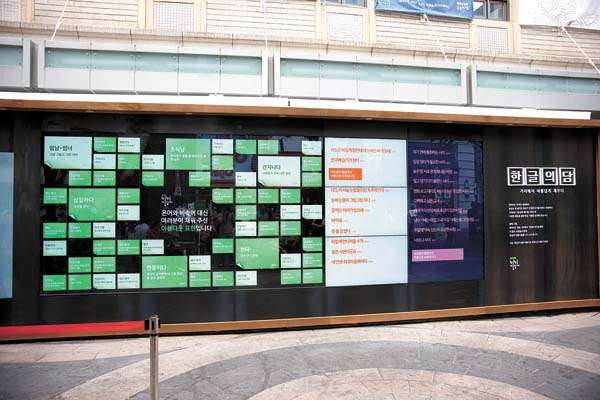 Naver’s Hangul Wall is installed every year in Myeong-dong, central Seoul, in October. Participants can attempt to translate slang and jargon into standardized Korean language. Provided by Naver

Although customers tend to only visit once in a while, the distinctive smell of old paper is strong enough to make passersby reminisce about the analog age.

Second-hand bookstores began to emerge in this neighborhood from 1959.

Some small independent stores across the country received new shop front signs from Naver. The signboards are designed to best express the content of the business and use special Hangul fonts developed by the online search company. Provided by Naver

The area had its lucrative years when nearly 200 shops selling limited editions called it their home. But after the Asian financial crisis in 1997, many had no choice but to close down, leaving just 25 behind.

Naver, the country’s largest Internet content service operator, picked this street for its annual Signboard Sharing Project, one of many under the company’s Hangul Campaign.

In an effort to spread the Korean alphabet and promote its aesthetically pleasing quality both online and offline, Naver launched the project in 2005.

The company selects small independent stores and exchanges their old signs for new ones written in Hangul typography that was developed by Naver.

Last year, when the project first launched, 20 store owners among 1,013 who sent in stories about why they need a new shop sign received one. Each sign is designed to suit the business and Naver also helps the stores come up with new names, especially those written in English.

This year, 41 stores were chosen across the country, including the 25 second-hand bookstores near Cheonggye Stream.

“When I first heard that Naver was going to change the old and rusty signboards of the bookstores, I simply thought the company was financing us to get new signboards,” said Hyun Man-su, the owner of “Christian Books” in the street.

Hyun said he was “not at all irritated” by the worn-out signboard he put up 25 years ago when he opened the bookstore.

“But when I saw the outcome, I was amazed,” said Hyun. “They weren’t just giving us free signboards, they made the valuable culture and history of this old book street, more appealing to the public, especially young Koreans.

Many of the bookstore owners didn’t really care how their signboards look, according to Hyun.

“If they changed their telephone numbers, instead of switching the numbers on the signboard, they just crossed it out with a marker and wrote down a new number beside it,” he chuckled.

As second-hand bookstore businesses have faced a downturn for many years, Hyun says most of the shop owners tend not to spend unnecessarily.

Hyun’s own business has been falling ever since the 1997 economic crisis.

“I started the bookstore with the heart of a volunteer service. But now, I am practically making donations with this business,” he said.

While looking up at the sign, which lights up at night, Hyun said that he is amazed “the beauty of Hangul and the power of design each day.”

“The new signboards look unified, yet each of them is distinct in their own way,” he said.

“Now that I think about it, the old signboards made this whole neighborhood look messy and an area where young people don’t want to go.”

Although the makeovers may not bring in the big bucks, Hyun says he just hopes to see more young people visiting the area, falling in love with Korean books and becoming mesmerized by the beauty of Hangul.

For the project, Naver and its cultural foundation worked with the Seoul city government and the Ministry of Culture, Sports and Tourism. They also held an exhibition while the signs were being replaced, just in time for Hangul Proclamation Day on Oct. 9.

It displayed a miniature clay model of the old book street in the 1960s and ’70s, and also introduced rare books that are sold in the stores.

“Through Naver’s Hangul Campaign, we hope to ruminate on the priceless value of Hangul that’s fading away,” said Yoo Seung-jae, head of Naver’s Marketing Center.

“We hope that people pay more attention to their surroundings and the objects that are in Hangul such as books, texts and signboards and appreciate the beauty and grace of Hangul and its significance as cultural heritage.”

On Hangul Proclamation Day, Naver and Seoul City organized a small get together of young, active bloggers and calligraphers. Together with Seoul City Mayor Park Won-soon, they discussed the significance of Hangul, its transformation, and how it’s becoming tarnished due to the Internet.

The bloggers discussed how they should pay attention to using too much Internet jargon and slang, as well as avoid the purposeful misspelling of some Korean words.

After participating in the event, the bloggers quickly posted reviews of their chat with Mayor Park and said they will be careful not to distort the Korean language in future.

Naver also installed a large digital wall in Myeong-dong, central Seoul, last October to allow the public to think about the slang and alien words they use without thought in everyday life.

During last year’s event, participants were given the opportunity to rewrite different Internet jargon and slang into conventional Korean.

This year, Naver allowed passersby to listen to some slang that is widely used online and translate the terms into standard Korean.

One participant attempted to translate the made-up word “men-boong,” or “mental breakdown,” which can be expressed as “I’m losing my mind.”

Other projects under the Hangul Campaign include the distribution of free Korean alphabet fonts online.

The Nanum Fonts project began in 2008. Every year, Naver has been designing new Hangul fonts for complimentary use.

Naver’s new fonts have been used on various websites as well as on e-cards and documents.

According to Naver, 23 fonts under four categories have been disseminated for free. Naver said the fonts appeal mostly to younger people and are widely used by this group.

Some, like “Nanum Eco” are specifically designed to use 35 percent less ink while also making mobile content more readable.

According to an official from Naver, the nanum - or “sharing” - fonts “are for individuals or small and midsize companies who feel burdened by having to purchase appealing Hangul fonts.”

The official added that “the usage is diverse, ranging from private blogs to advertisement logos.”

Naver published a book about the font project, hoping to allow more people to realize the beauty of the Korean alphabet and to read stories that entrepreneurs of small businesses share about how new font designs shared by Naver have brought about a positive effect on their companies.

Hangul is not Naver’s only focus when it comes to corporate social responsibility projects connected to culture.

Naver established its cultural foundation in 2009, a couple of years after it began organizing various campaigns and events to promote Korean books and libraries.

In 2010, the Naver Cultural Foundation also launched a support program for indie musicians. In November 2010, the foundation even opened an online platform to introduce new up-and-coming indie bands called “Onstage.”

Every week, one indie musician or indie group is selected to introduce their songs to the general public by allowing them to use facilities needed to record a live concert. The videos are then uploaded to Naver.

In March, the “Onstage” project received a Special Award by the Korean Music Awards, which said that Naver’s project received this special prize for “providing publicity for indie bands and shedding new light on them, who tend to receive less attention by the public among popular Korean bands and idol groups.”

According to Kim Ji-ha from the Naver Cultural Foundation, “The Onstage project not only exposes indie bands to the public, but also allows artists with relatively lesser budgets to promote their groups by creating a professional video clip that can represent them.

“With the motto ‘an encounter with the hidden music world,’ we started this project in November 2010,” said Kim during the award ceremony in February.