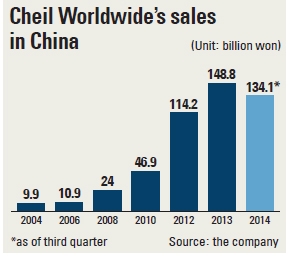 Korea’s top advertising company Cheil Worldwide is trying to increase its presence in China, as the country provides more opportunities than the stagnant local market.

The Samsung affiliate announced yesterday that it plans to designate its China unit as its second headquarters based on its strong performance in recent years growing its brand recognition there.

China is the third-largest ad market in the world but is poised to overtake Japan to become the second largest this year.

Cheil said that revenue at its China unit, called Cheil Greater China, has gradually increased each year since the advertising company launched its Beijing office in 1994.

That growth has accelerated over the past five years with revenue generated from Cheil Greater China expected to exceed revenue in Korea for the first time.

In China, Cheil partially attributed its growth to better name recognition after it won awards in prominent advertising competitions.

Last month, the company was recognized as the Best Creative Agency of the Year at the ROI Festival, taking eight gold, five silver and one bronze in the ad competition. It also won four awards at the China International Advertising Festival.

Cheil said its success was also boosted by the popularity of K-pop stars in China.

Cheil often recruits popular drama stars for its commercials, such as promoting the Galaxy S5 with actress Jeon Ji-hyun and actor Kim Soo-hyun.

Cheil’s growth in China was also helped by its digital ads for the flourishing e-commerce market.

“Cheil is the seventh-largest ad company and fourth largest for digital ads, which proves our competitiveness,” said Aaron Lau, CEO of Cheil Greater China, in a statement.

“We will strengthen our foothold by keeping a competitive edge in social media and e-commerce marketing.”

Ads for online shopping malls are among the biggest growing areas in China due to the success of e-commerce websites in the country operated by Alibaba.

Many in the ad industry consider the local advertising market saturated as TV viewership has declined and competition among digital marketing firms has intensified.

However, China has room for expansion thanks to its huge population and higher average daily television consumption (three hours) compared to Korea (less than two hours).

Cheil Greater China’s major clients include Baidu, Industrial & Commercial Bank of China and Agricultural Bank of China, as well as Korea-based companies such as Orion and Hankook Tire.