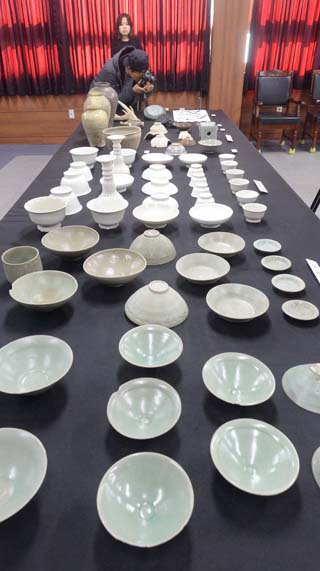 Archaeologists have found a ship in waters off Mado Island in South Chungcheong that is presumed to be from the Joseon Dynasty (1392-1910), Korea’s Cultural Heritage Administration announced yesterday.

Should the presumption prove true, it will mark the first discovery of a ship from the 500-year dynasty that ended with the start of Japanese colonization of Korea in 1910.

Koreans have discovered 12 ancient sunken ships so far, 11 from the Goryeo Dynasty (918-1392) and one from the Unified Silla Period (676-935). Strangely, they found none from the later Joseon Dynasty despite records of vessels sinking near Mado Island.

What makes the Korean experts believe the ship is indeed from Joseon? Its porcelains.

Buncheong ware, produced during the first 200 years of the Joseon Dynasty, has a relatively coarse body and a green-tinted glaze, which experts say was the transition from Goryeo celadon to Joseon porcelain.

“We will be sure of the ship’s era once we complete the underwater archaeological exploration next year,” said Sin Jong-guk, a researcher with the institute.

“But the two pieces of Buncheong ceramics we found are believed to be from around 15th-century Joseon.”

The ship, which measures 11.5 meters (38 feet) long and six meters wide, was first found in June when Korean archaeologists conducted a general inspection of the waters off Mado Island, Taean County.

The area is considered an underwater treasure trove: So many ships sank in the area because of fast tidal currents, rocks and fog that the waters earned the nicknames “Cemetery of Wrecked Ships” and “The Underwater Gyeongju,” referring to the city in North Gyeongsang that used be the capital of the Silla Dynasty (57 B.C.-A.D. 935) and which features many historical sites and artifacts.

Korean archaeologists have found four ancient ships in the area since 2007, excluding the latest, unearthing about 30,000 artifacts.

The porcelains found near the Joseon ship - believed to be from the 18th or 19th century - were in several bundles, officials of the National Research Institute of Maritime Cultural Heritage say, which indicate that the ship was probably transporting the items and was a freight vessel.

The ship’s surface had extra wood finish, which officials say was to strengthen its waterproof capabilities, and there appear to have been rice straw underneath the bundles of porcelain ceramics to prevent breakage.

“[The findings] show how porcelains from different regions were traded to other regions through sea routes,” said Rha Sun-hwa, the head of the Cultural Heritage Administration.

However, there are some questions still to be answered. The major one is how the porcelain pieces were found near the ship, but not on it.

Also, it has been widely believed that during the Joseon era, there were kilns for making porcelains across the peninsula, making it unnecessary to transport them in large amounts via the sea. So if the ship is really from the Joseon era, that theory should be re-examined.

The underwater archaeological exploration of the ship will begin in April.