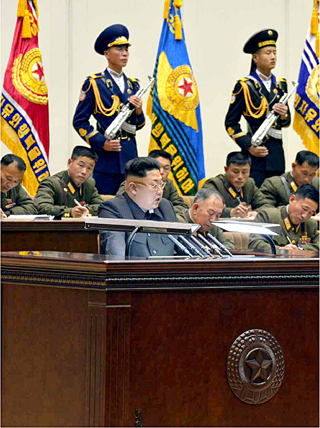 North Korean leader Kim Jong-un summoned the commanders of frontline troops for a rare gathering, where he emphasized the importance of military readiness and showed an apparently improved physical condition by moving around without the aid of a cane.

According to the regime’s Korean Central News Agency, Kim convened meetings with frontline commanders on Monday and Tuesday in Pyongyang - the first time he has hosted a gathering of battalion commanders and political commissars.

“Today, we are facing a confrontation against our enemies and we are required to uphold the military-first spirit and reinforce our military power,” the young ruler was quoted as saying at the event.

He stressed that combat readiness and training operations were the military’s most important tasks, emphasizing that “there is no tomorrow when preparing for a fight.”

The Rodong Shinmun, the mouthpiece of the Workers’ Party, published photographs of Kim walking without a cane. It was first time he was seen at a public event walking without assistance since he came back from a 40-day seclusion.

Kim disappeared from public view on Sept. 3 but resumed official activities on Oct. 14, when he visited a construction project site. Since then, he has often been photographed using a cane.

South Korea’s National Intelligence Service said last month that he was recovering from ankle surgery after having had a cyst removed.

They included Vice Marshal Hwang Pyong-so, the director of the General Political Bureau of the Army; Kim Won-hong, the head of the Ministry of Public Security, the highest North Korean intelligence authority; and Jo Kyong-chol, the director of the Defense Security Command.

The battalion commanders and political commissars adopted a pledge of allegiance to Kim at the meeting.

By all appearances, it seemed as though he was attempting to tighten his grip over the military with the anniversary of Jang Song-thaek’s execution approaching.

According to government sources, he demoted officers en masse earlier this year after allegedly showing dissatisfaction with the efficiency of one unit’s use of artillery.

But the young leader appears to be using a “carrot and stick” approach. While strictly disciplining the military, he has also tried to boost morale.

According to the KCNA report, five officers were declared state heroes and decorated for their elite service over the past decade.