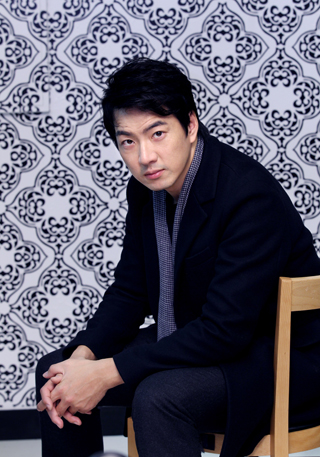 
Actor Song Il-kook lifted the curtain on the second act of his acting career recently with a departure from the highly masculine roles in TV dramas such as “Jumong” (2006) and “A Man Called God” (2010), which have made his career since his debut in 1998.

He now shows a more mellow and caring side after he joined the KBS variety show “Return of Superman.” He came onto the show with his boy triplets, and started to show a more paternal image. He’s also fun, like the enjoyable uncle next door.

The change of image will be seen in his other works. “Entangled,” his first movie in 10 years, was released yesterday. He plays a weak, collapsing man who faces a breakdown of his family.

“I’m more relaxed these days, or at least that’s what my acquaintances told me recently,” said Song in a recent interview with Ilgan Sports, an affiliate of the Korea JoongAng Daily. 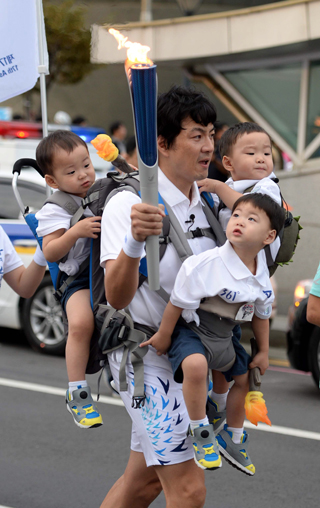 Actor Song Il-kook runs while delivering a torch for the 2014 Incheon Asian Games in September while carrying his triplets in Incheon. [JoongAng Ilbo]

“Ten years ago I was more frigid, but the current version of myself knows how to make a joke. These are the changes I have gone through after I got married and had children,” Song said.

Q. Was it a hard decision to take part in the variety show?

A. I really sat on the idea. My wife strongly opposed it. Now I’m glad that I decided to do this and my wife now supports it greatly as well. On her end, it’s like getting a vacation every three weeks. The best thing is that I can do lots of things with my children. It’s more difficult than you can imagine carrying three children around. I feel like I could even survive an adventure in the Amazon jungle if I had only one kid. I’m so delighted that I can have some special moments with my children through the program. It allows my children and me to build some good memories.

Didn’t you worry about your children being exposed to the public?

Of course I worried. If they were at an age when they would realize they were on TV, I wouldn’t have decided to do it. Fortunately, the children are about 30 months old and they don’t acknowledge such an idea yet.

I was worried if the children would be under a lot of stress. But, once the filming started, such worries disappeared.

How much time do you spend with your children besides filming the program?

On weekdays, we get help from a babysitter. I try to do my best to stay with the children when not working. If there’s nothing special scheduled, I spend weekends with the kids. Before they turned 1, my wife admitted that I did most of the childcare.

Don’t the kids look for their mom during filming?

Fortunately no. I’m not lying, but I think the children like me more than their mom because I try to brainwash them [by making them repeat they like me more]. Also, their mom is a full-time worker and my schedule [is more flexible than hers].

Did you really mean it when you said you could raise them to become celebrities?

I meant to say that I want to support my children’s decisions. It doesn’t matter what career paths they choose, I just want them to be healthy.

Don’t you want a daughter?

I really do. When I first got married, I really dreaded having a boy because I was scared the kid would be just like me. I was a mess in my 20s and early 30s, and I don’t even want to remember those times.

How do you feel about being looked at as a very sweet father figure?

I have formed a better public image. I tried looking for comments about myself online, and I didn’t really have a very good reputation. I didn’t know that my public image was so bad in the past. I might have lost some charm from the characters I played in previous dramas, but I’m think I’m earning something better now.