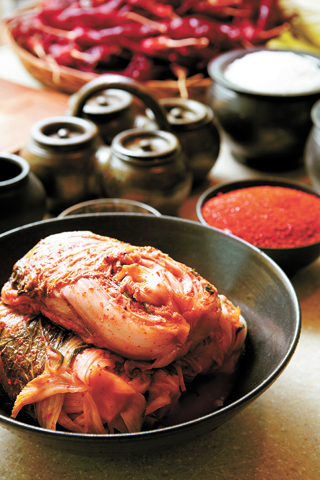 Dropping temperatures, longer nights and shorter days are all tell-tale signs of winter, but there are further indicators of the season’s arrival: when stacks of Napa cabbages, pouches of coarse sea salt and pairs of red rubber gloves are put on display at nearby grocery stores.

These are the essential products used for kimjang, the process of preparing and making kimchi.

Kimjang is usually performed on the arrival of ipdong, the onset of winter on the ancient lunar calendar. 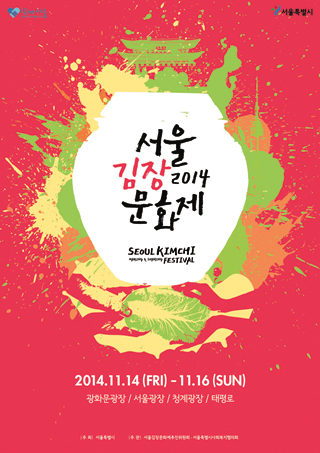 Kimchi is ubiquitous on Koreans’ dining tables and is served with almost everything - from bowls of instant noodles to plates of creamy pasta.

But as fewer families ferment the dish at home, which is a time-consuming process, less people are experiencing kimjang.

However, while it is true that the centuries-long tradition has waned over time, kimjang was registered as a Unesco intangible cultural heritage last December because the agency sees as a staple of Korean culture.

“Fewer people get together and make kimchi these days compared to the past,” said Bak Sang-mee, a professor of international studies at Hankuk University of Foreign Studies.

Bak has been in charge of preparing the documents needed to register kimjang as a cultural experience over the past year, alongside other members of the Cultural Heritage Administration.

“Although the form of kimjang has changed over time, people still do it, and local communities also do large-scale kimjang with its core spirit of making and sharing remaining intact,” added Bak.

In the past, whole villages experienced kimjang together in order to prepare enough kimchi to get residents through the winter.

Per household, 100 Napa cabbages were used on average back in the 1950s and 1960s, but the scale of kimjang has shrunk with the advent of smaller families. As a result, group kimjang has become scarce in cities like Seoul.

But the Seoul Kimchi Making and Sharing Festival, which launches for the first time this year, is attempting to reinvent the winter ritual from a cultural point of view.

The three-day festival will take place between Nov. 14 and 16 around Seoul Plaza and Gwanghwamun Plaza in central Seoul.

Themed under five categories - sharing, exhibitions, hands-on experiences, market and cultural activities - the inaugural festival has a lot to offer.

The highlight is the large-scale kimjang that will continue for three days. Companies, volunteers and civic groups will make kimchi, and about 6,000 people are expected to donate 260 tons of kimchi to the underprivileged.

Large-scale kimjang has been around for many years as part of companies’ corporate social responsibility campaigns, so the Seoul Metropolitan Government invited a couple of businesses to attend the festival for people to watch the process.

Ordinary people will not able to participate in these events, but there are still opportunities to get your hands dirty.

Under the festival, there are several cooking programs. Most are operated on online reservations, which are now mostly closed, but there are some you can sign up for on the day of the event.

During the festival period, Yangpyeong Farm Village will hold two classes, at 11 a.m. and 1 p.m., at Sejongno Park.

Each class is open to 25 people on a first-come, first-served basis and participants are able to make classic kimchi along with bossam, or boiled pork, which is often enjoyed on the day of kimjang, along with fresh kimchi. The free cooking class also teaches people how to make homemade pork sausages.

Each class accommodates up to 400 people for kimchi-making and participants are encouraged to donate a certain amount of money. All proceeds will go to the Seoul Council on Social Welfare.

If you are a foreign citizen, cooking classes hosted by local kimchi manufacturers also have openings.

On Nov. 14, a class by CJ Cheiljedang will teach non-Koreans how to make dishes using kimchi, as well as some namul, or seasoned vegetable dishes. You can register for the cooking class through the official festival website.

At Gwanghwamun Plaza, the entire process of making kimchi will be demonstrated by experts every day at 11:30 a.m. and 3 p.m. during the festival period. You can also try some kimchi-inspired food made by hotel chefs at Cheonggye Plaza and Sejongno Park every day from 10 a.m. to 5 p.m.

The festival is not all about eating and making kimchi. Kimchi-themed art projects by six young artists will be installed across the event’s venue. Of the many art projects, photographer Solne’s “Everyone Says Kimchi” seems ideal for people who want to capture memories at the kimchi festival.

Inspired by the Korean trend of saying “kimchi” when posing for photos, the photographer will take pictures of about 20 to 30 people daily, which will then be put on display.

Another highlight is the kimchi relay.

About 2,000 people will divide into two teams and each will race to deliver Napa cabbages to their rivals. The team with the most cabbages when the whistle blows loses.

About 10 tons of cabbage will be used for the race. Participants can take the cabbages home at the end and the rest will be used as compost.

The race is slated to start at 2 p.m. on Nov. 16 at Sejong-daero. Apply to enter on the festival’s website until Nov. 11.

Markets will also be set up where people can purchase kimchi-related ingredients at a 20 percent discount from 10 a.m. to 5 p.m. around Taepyeong-no.

? Cooking class on how to make kimchi and bossam (boiled pork), which is often enjoyed with fresh kimchi the day the dish is prepared and with homemade pork sausages.

? Each class is open to 25 people who sign up on a first-come, first-served basis.

* Cooking class on kimchi and some namul, or seasoned vegetable dishes.

* Only open to foreign citizens. The reservation should be made through the official website of the festival, festival.seoul.go.kr/2014kimchi.