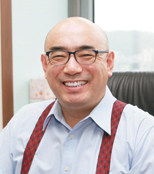 Chun Jae-wan, the former CEO of the website Freechal that was part of the rise of Internet chatting in Korea in the early 2000s, is trying to come back to the market with a new mobile app, Airelive.

After playing his part as one of the founders of online chatting, Chun has created a mobile app that combines the main features of KakaoTalk, Twitter, Facebook, YouTube and AfreecaTV, on which users can quickly share live or previously recorded videos.

Chun established the company Aire in the United States to develop the app. He is currently the CEO of Airelive Korea.

He said Airelive was the realization of a dream that he has had for a decade.

It has been 10 years since he was released from jail in 2004 after his arrest in 2002 on charges of fraudulent payments for share subscriptions of Freechal.

He was acquitted of the charges, but whether his return to the IT industry will be long term depends on the new service.

Because Airelive combines features used in other apps, its took four years to develop and cost 20 billion won ($18 million).

Chun said he created the mixed social network service because he believes a global platform that allows multiple types of communication will be more powerful as the mobile era ages.

“While in prison, I knew that Steve Jobs was developing smartphones and thought that the mobile world would come soon,” Chun said. “I wanted to deliver all the information that can be seen with your eyes to people who want it.”

Up to four people can be included in an Airelive video chat using Wi-Fi, 3G or 4G.

The app’s feature for sharing live footage is also useful. Users can share their view of a festival or a live concert. Airelive allows 10 gigabytes of storage per person on its server.

“Though there is commercial content on YouTube, Airelive can be more personal and a lot of videos for the benefit of the public could make it a new form of SNS,” Chun said.

Airelive is registered on Google Play’s app market, so Android users can download it for free. The web and iPhone versions will be launched at the end of November.

The one concern for Chun is that Aire has become an American company rather than a Korean one.

“To develop this app, at least 100 people had to work on it for three years. But no one in Korea invested in the idea no matter how much I explained it,” he said.