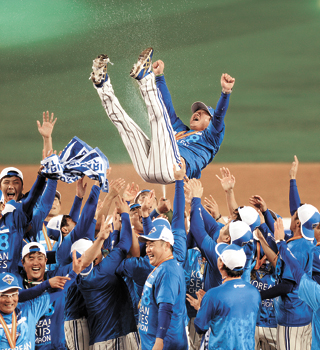 
Six games were enough for the Samsung Lions to end the best-of-seven Korean Series, as the defending champions clobbered the Nexen Heroes, 11-1, on Tuesday at Jamsil Baseball Stadium.

Samsung, the regular season champion with a record of 78-47-3, became the first team to win four consecutive 1eague and Series titles.

The Heroes were making their first Series appearance.

Nexen managed to win one of two games at both the Lions’ den in Daegu and at home at Mokdong Stadium in western Seoul, but lost the next two games on neutral turf at Jamsil.

Samsung starter Yoon Sung-hwan and Nexen’s Oh Jae-yeong did not allow a run for the first two innings.

But the Lions broke through in the third, when Chae Tae-in singled in two runs and Choi Hyeong-woo doubled to drive in two more.

Nexen responded with a run in the fourth.

In the sixth, the Lions’ Yamaico Navarro blasted a three-run homer deep into the left-field stands and the rout was on.

After Yu Dong-kyun drove in two more runs in the next inning, Navarro collected another RBI single. In the ninth, he finished his year with yet another RBI.

Navarro was selected the Series MVP, winning 32 of 73 votes by reporters. He is the third foreigner so honored.

The four straight league and Series titles were not the only records set by the Lions.

Samsung’s Park Han-yi also collected the 51st Korean Series hit of his career in the sixth inning. After being called out at first base on a ground ball, the call was challenged by the Lions and overturned after umpires watched the replay.

Park managed to set another record when he scored from third base on Chae Tae-in’s double in the third inning. The run was the 36th of his career in the Korean Series and 50th in the postseason.

Choi Hyeong-woo became the career leader in doubles in the postseason after hitting his 15th in the third. Choi previously was tied with Nexen’s Jeon Jun-ho and Doosan’s Hong Seong-heun.

Samsung starter Yoon picked up his fourth Korean Series victory. He also was the winning pitcher in Game 2, holding the Heroes to one run in seven innings. He allowed only one run in six innings on Tuesday, striking out four.

Taking the loss was Nexen’s Oh, who gave up four runs in 2 1/3 innings before being replaced by Mun Seong-hyeon.