Seniors in Korea getting into IT

Seniors in Korea getting into IT 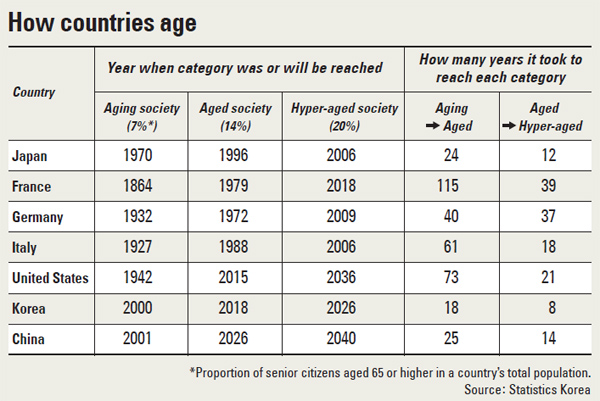 But on Wednesday, a group of graying IT entrepreneurs shared their experiences learning IT technologies after retirement and starting their own businesses to a crowd of roughly 250 fellow seniors during a government-organized event held at Myungbo Silver Theater, a movie theater that exclusively caters to seniors in Jongno District, central Seoul.

The day before, the theater was showing “Lion of the Desert” starring Anthony Quinn and Oliver Reed, a largely forgotten historical drama from 1981.

Yet on Wednesday, the crowd was more interested in starting IT businesses and creating jobs for senior citizens in the digital field.

One of the presenters was Kim Kyung-yul, 66, who recently started his own IT maintenance company.

“In an era of centenarians, being in your 60s or 70s just means you’re in the second half of your life [and not at its end],” said Kim on stage. “At the moment, my main business is in the neighborhoods surrounding my office, but I plan on expanding my reach across the entire country using the Internet.”

With his white hair and wrinkles, Kim looks like any other senior citizen. But he had a gleam in his eye when he was going through his PowerPoint presentation.

Kim was an average company worker who retired at 60. Instead of just hanging around the living room and killing time with the television set, he started taking computer classes at a private hagwon, or a cram school, where he ended up earning six IT-related certificates.

He gained confidence that he could still be a productive part of the work force, and finally decided to start his own business three years ago with only 300,000 won ($270). He specializes in computer and network maintenance.

In recent years, more retirees in their 60s and 70s are jumping into the IT industry. This is largely due to the rapid technology adoption by Korean society.

Households in remote areas are connected to the Internet and Korean seniors are known for communicating with friends and family through smartphone apps like KakaoTalk.

According to an OECD report, Korea ranked sixth in the world with its wireless, high-speed Internet penetration rate, trailing behind Finland,

Australia, Japan, Sweden and Denmark. A report by Akamai Technologies ranked Korea as the country with the fastest average Internet connection speed as of the first quarter. Japan trailed behind in second place and Hong Kong came in third.

“Roughly five out of 10 seniors who are 50 or older use the Internet,” said Chang Kwang-soo, president of the National Internet Society Agency (NIA). “By turning senior citizens into a productive group [using IT technologies], we can contribute to solving Korea’s critical aging-society problem. This would be a new senior citizen welfare policy.”

The rapidly-aging society has become a major threat to Korea’s economic future.

In fact, according to a study by Statistics Korea, the country suffers from one of the lowest birthrates in the world and the fastest aging population.

Korea already became an aging society in 2000 with 7.2 percent of its total population aged 65 and older. The country is expected to become an aged society by 2018 and enter the stage of a hyper-aged society in 2026.

The government encourages retirees to show interest in IT businesses and decided to hold the event on Wednesday. It was hosted by the Ministry of Science, ICT and Future Planning and the NIA.

Shin Beom-soon, 72, told a story of how she opened an online shopping mall from which she sells clothing purchased at traditional markets. Park Young-sook, 57, grabbed the attention of the crowd when she talked about developing an app after retiring from the U.S. army after three decades.