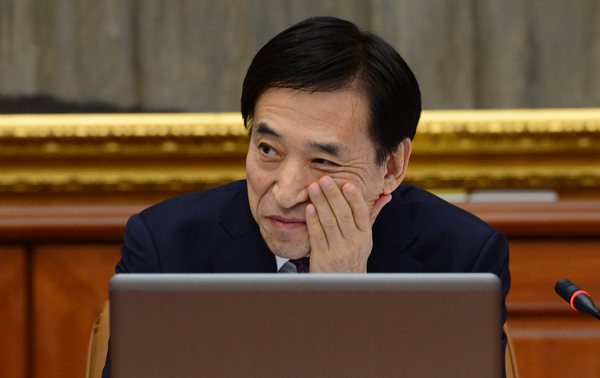 Bank of Korea (BOK) Governor Lee Ju-yeol admitted yesterday that the recent downturn in the European economy and? the continuing depreciation of the Japanese yen are having negative effects on the Korean economy.

However, he said he believes the recent buildup of fear in the market over the two issues has been overblown.

The governor said the weak yen could hurt the nation’s global export competitiveness if it continues, but he then stressed that he thought it would not last long.

As a result, the central bank froze the key interest rate at its all-time low of 2 percent yesterday.

The monetary decision comes at a time when Europe’s rapidly declining economy and the continuing supply of liquidity from Japan’s central bank have surfaced as new threats to Korea’s economic recovery.

Some in the market have been raising the possibility that the Korean central bank could cut the nation’s key borrowing rate again to counter the situation.

Although most experts bet that the BOK would freeze the key rate this month because it would be a burden to lower it again after cuts in August and October, they are now focused on whether Governor Lee is considering the move if the Korean economy loses strength.

Before the BOK’s monetary policy committee made its decision, Park Hyuk-soo from Daishin Securities’ economic research center predicted that the central bank would freeze the rate this month and observe the market’s response.

The researcher added that although he believes the possibility that the central bank will use monetary policy to counter the weakening yen is low, the BOK wouldn’t throw out the idea of another rate cut.

The deciding factor could be whether the economy sticks to the BOK’s projected growth through the first quarter of next year.

Lee said the fourth quarter is important because the BOK will announce next year’s economic outlook in January and if growth falls shorter of its expectations in the final months of this year, then the outlook for the first quarter would have to be readjusted. If so, policy changes, which could include a rate cut, will be proposed.

When asked about the possibility of a rate cut in the near future, the governor said, “It’s difficult to predict.”

However, he was more positive than the market over the impact of Europe and the yen.

“We are concerned over the worsening sentiments of Korean businesses and households resulting from the receding external conditions,” Governor Lee said. “As even the German economy, which has been holding up the European economy, is staggering, a negative outlook is spreading and there are a lot of reports on the negative influence caused by the rapid depreciation of the Japanese yen.

“Of course, these are factors that are concerning, but there is also the aspect where the market’s response to such issues has been excessive. It seems the negative influences [of these factors] have been exaggerated beyond what they actual are.”

The governor added that the weak yen it will not have a lasting effect on the Korean exports.

“We can say our export goods price competitiveness has worsened against that of Japan and this could especially affect industries like automobiles, machinery and steel, in which Japan is strong competition,” the governor said. “Until now our exports have been doing relatively well, but if the depreciation of the yen continues or speeds up it could be a concern.

“But there is a limit. Our own won against the dollar has also weakened a lot and therefore I don’t think we are at a disadvantage against Japanese goods in other global markets. Also the yen cannot weaken limitlessly.”

He added that the current borrowing level is appropriate.

“We have lowered [the rate by] a combined 50 basis points on two accounts - August and October - and when looking at the money supply situation, it seems the influence of the rate cut is working smoothly,” Lee said.