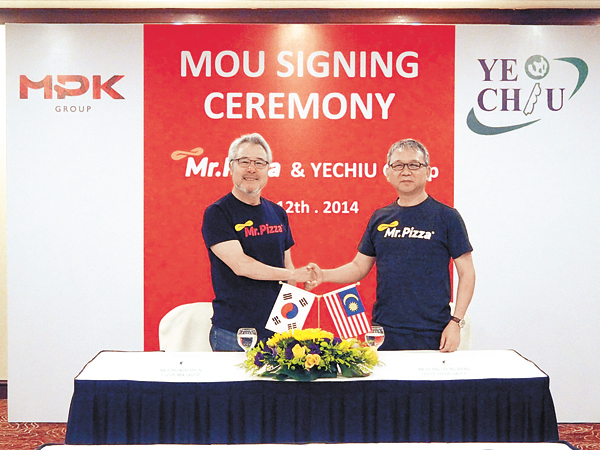 Jung Woo-hyun, chairman of MPK, left, and Huang Chung-Sheng of Yechiu shake hands after signing an agreement in Kuala Lumpur yesterday to operate Mr. Pizza in Malaysia, Indonesia and Singapore. Provided by the company

MPK Group said it signed an agreement with Malaysia’s Yechiu to establish a joint venture to operate the pizza stores in the three countries.

Yechiu is a Malaysian company that focuses mostly on manufacturing, processing and trading aluminum but recently started managing restaurants.

Under the agreement, the two parties will launch the joint venture in six months in Malaysia, and will oversee operations from there.

The two companies will begin opening stores in the first half of next year. Mr. Pizza plans to have 50 restaurants in Indonesia, 30 in Malaysia and 20 in Singapore by 2017.

The move is the latest overseas expansion by MPK Group, which has also opened restaurants in the Philippines, China and the United States.

Earlier this month, MPK announced that it will open at least 100 stores in the Philippines by 2019, with the first shop set to open in April at SM Megamall in Manila. It signed a franchise agreement with the Philippines’ WCGC to operate the stores. WCGC is a large dining company that manages a lot of popular brands.

MPK has 45 stores in China and plans to open 300 more branches there by 2016. Its China unit has become popular this year, with Mr. Pizza recording a 115 percent, or 7.4 million yuan ($1.2 million), surge in sales in the first five days of October compared to the same period last year.

One of the company’s strategies to appeal to Chinese consumers was to install an open kitchen to show the process of making pizzas in an effort to ease food safety concerns.

“As was the case for the operation in China, it is always imperative to find an excellent local partner to run the business in Southeast Asian countries,” said Jung Woo-hyun, chairman of MPK. “I am really pleased to have a qualified local partner, Yechiu, which has a good financial track record and strategic business acumen.

“The joint venture with the company will help Mr. Pizza grow in the new markets.”

In 2013, the company launched its third U.S. store in Los Angeles in Koreatown.