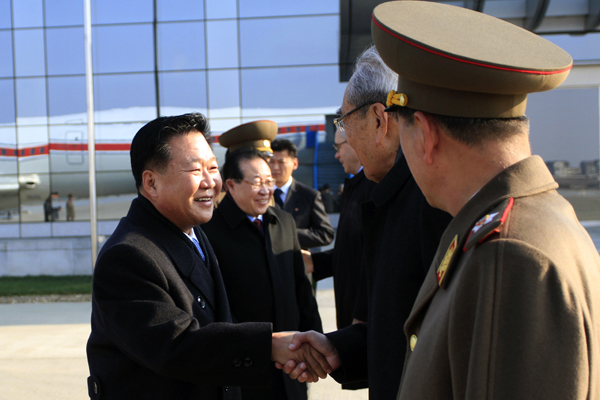 According to the AP and its TV network APTN, Choe Ryong-hae, a senior Workers’ Party official and a close aide of the North’s young ruler, will stay in Russia until Nov. 24. He will visit Moscow, Khabarovsk and Vladivostok during his trip.

Choe’s departure was aired by APTN, while the North’s state-run media remained conspicuously silent about his trip as of yesterday afternoon.

Top North Korean officials including General Hwang Pyong-so, director of the General Political Bureau of the Army, Kim Ki-nam, a Workers’ Party secretary in charge of South Korea affairs, and Foreign Minister Ri Su-yong were at the airport to see Choe off.

The North announced last week that Choe, who holds many titles in the North including being a member of the Politburo Presidium of the Workers’ Party and a secretary of the Workers’ Party Central Committee, will visit Russia as Kim Jong-un’s special envoy, but did not elaborate on his trip or its purpose.

Russia’s Foreign Ministry said Moscow wants to discuss trade and economic ties as well as the situation on the Korean Peninsula and in Northeast Asia.

Lim Byeong-cheol, South Korea’s Unification Ministry spokesman, said yesterday that Pyongyang was trying to diversify its diplomatic support by sending a special envoy to Russia. Until now, the North heavily relied on its alliance with China, but the two countries’ decades-long friendship has seen some strains since Kim Jong-un became leader.

Lim also said the North is stepping up its diplomacy as international pressure over its nuclear program and human rights abuses has intensified.

Vice Minister Kim Kye-gwan, who is part of Choe’s entourage, is the North’s point man in the stalled six-party talks to end the regime’s atomic weapons programs, and the nuclear issue is expected to be discussed during Choe’s trip.

Since Choe is the special envoy of Kim, he is also expected to meet Russian President Vladimir Putin. Observers said the possibility of arranging a North Korea-Russia summit could also be a part of Choe’s mission.