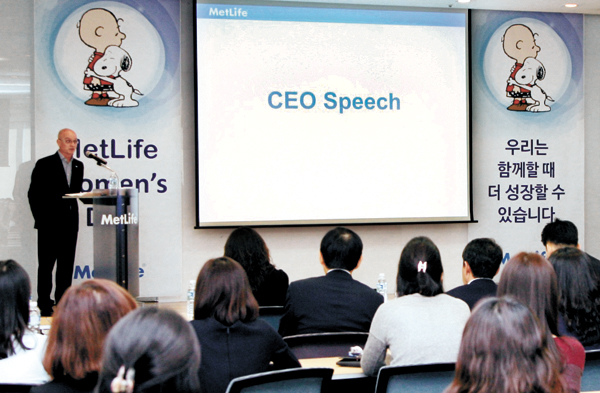 CEO of MetLife Korea Damien Green gives a congratulatory speech at the Women’s Day ceremony on Oct. 7 at the company’s headquarters. Provided by the company

MetLife, a global insurance provider, believes that respecting and understanding diversity in culture, race, religion and gender is key to international success. The company’s affiliates around the world follow a strategy of diversity and inclusion to achieve shared value in each community.

MetLife Korea went a step further and set its focus on women. Last month the company hosted a Women’s Day ceremony in the training center of its headquarters to solidify a corporate culture that encourages the growth and development of female workers.

The employees who attended the event shared their ideas for actually developing a female labor force, including improvements that need to be made in terms of the system, job competency and establishment of such a culture. The discussion resulted in a foundation for improvement of the company’s labor management system, such as realistic policies for parental leave. The company expects to establish a truly friendly working environment for women.

MetLife applied its strategy not only inside the company but also outside: the company organized its social contribution services according to the strategy. One example is financial inclusion, the support project that began last year for low-income families and others who are having trouble using financial services. The project assists people suffering from financial difficulties and helps them to become economically self-sufficient by providing various programs.

Last January, MetLife made a business agreement with Social Solidarity Bank, a nongovernmental microcredit institution, to raise a fund for multicultural social enterprise that will provide multicultural families with education and job-searching services. The company donated 46 million won ($41,800) to the bank.

The company also contributed 200 million won to the Seoul government and to the Seoul Welfare Foundation last March to support financially neglected people in Seoul. The donation was for Hope-plus Savings Account, a program that doubles the amount of savings that an account holder makes, and financial camps for economic education and counsels. Additionally, the company plans to cooperate with government institutes to run various programs to establish realistic support for multicultural residents of Seoul who are struggling financially.

MetLife practices its diversity and inclusion strategy in the community through various projects such as economic education for single mothers and care programs for the elderly and disabled children.

“MetLife Korea’s employees will take the lead in creating the culture that values the shared value of the company, clients and community before the company’s profit,” said MetLife Korea CEO Damien Green.