Final construction work is being done at the Ikea store in Gwangmyeong, Gyeonggi, on Wednesday. The Korean branch of renowned Swedish furniture manufacturer opens Dec. 18. The building next to Ikea is Lotte Premium Outlet. [NEWS1]

GWANGMYEONG, Gyeonggi - Swedish home-furnishing giant Ikea has found itself ensnared in a spate of criticism even before it launches its first Korean store next month.

With the opening set for Dec. 18, the Gwangmyeong store is slated to be the world’s largest by floor area. 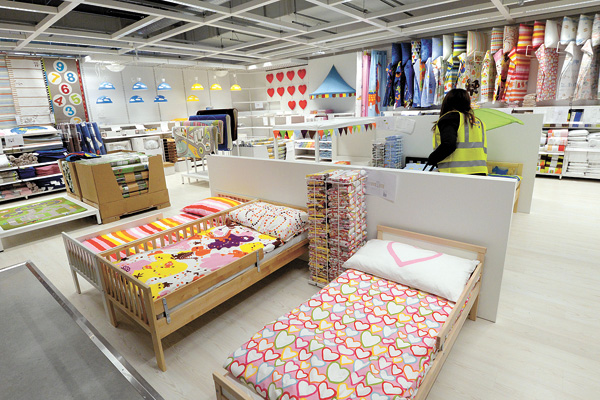 The major controversy facing Ikea includes what critics say are unfairly high prices in Korea and map products using the Sea of Japan with no reference to the East Sea.

The international retailer on Wednesday held a press conference at the under-construction store to apologize and explain its position.

Ikea Korea said that it was the company’s first such event prior to a store opening.

“We apologize for the situation we have created,” said Andre Schmidtgall, the retail manager of Ikea Korea.

The cost issue emerged shortly after Ikea Korea unveiled prices on its website last week. Korean shoppers compared the prices with those in other countries, only to find that some Ikea products are the most expensive in Korea.

Online postings featuring prices that were sometimes almost twice as much as in the United States, Japan and China went viral.

Ikea’s signature bookcase is also cheaper in the United States, Japan and China, with the price ranging from $60 to $65. The bookcase comes in at $72 in Korea.

“We consider different factors when we do pricing,” said Andrew Johnson, a sales manager of Ikea Korea. “Prices depend on whether the items come through distribution centers or directly from the factory, and where the factory is located.

“We make a decision on price once a year in February, based on currency situations.”

Johnson hinted that the weak yen also would have an effect on pricing Ikea items in Korea, saying, “The yen has declined dramatically and the won has remained strong.”

Customs charges also differ from country to country, he said.

The sales manager stressed that Ikea’s services are country specific and are affected by various factors from the overall industry, including logistics networks, currency values, customs fees and value-added tax.

“But we always aim to give customers the lowest price for comparable products sold by any competitor,” he said.

On top of the divergent prices, public anger intensified further when it was revealed that Ikea used the Sea of Japan on its world map to identify the body of water between South Korea and Japan.

The label appeared to trigger even stronger blowback because the naming issue is both a political and historical flash point between Korea and Japan.

“I once more humbly make an official apology to Korean consumers regarding the marking of the East Sea, which has recently been raised as an issue,” said Schmidtgall, the retail manager.

“Ikea Korea is trying very hard in every possible way to resolve the matter as soon as possible. We will take immediate measures regarding this matter both on the local and global levels.”

The retail manager reiterated that Ikea Korea “is in close contact with headquarters in Sweden” to settle the issue, without specifying how that might be done.

When asked whether the company would recall the map, Schmidtgall said that it won’t because the issue is not related to safety or security.

The Ikea Gwangmyeong store will have three floors of parking and two floors of office and sales space for a total floor area of 131,550 square meters (32.5 acres).

Ikea, founded in 1943 in Sweden, is the world’s largest home-furnishing company with more than 345 stores in 42 countries.

It is aggressively moving to further break into emerging economies and increase the number of its stores.

It plans to increase the number of its stores worldwide by as much as 50 percent by 2020.

As part of the plan, Ikea Korea is expected to open four more stores by 2020.