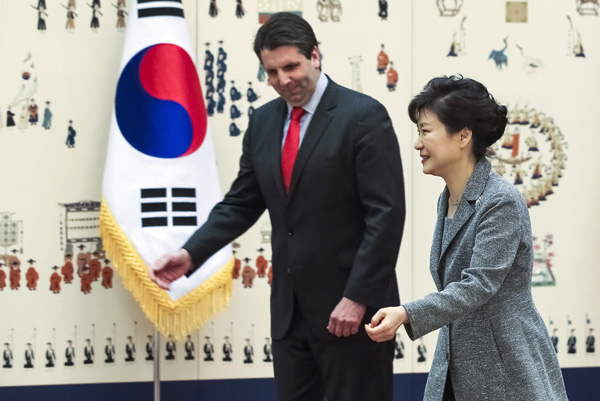 During their nearly 30-minute dialogue - longer than any other new ambassador thanks to the special alliance between Korea and the United States - the president and Lippert discussed a number of impending issues facing the two nations.

Lippert had not met Park since arriving in Seoul on Oct. 30, six days after U.S. Secretary of State John Kerry swore him in at the White House in the presence of U.S. President Barack Obama.

Despite being a relatively obscure figure internationally, the new ambassador to Korea has drawn attention from observers for his close personal ties with the White House and extensive network within the National Security Council and the Department of Defense.

Three weeks into his life in Seoul, the 41-year-old diplomat - the youngest of all American ambassadors dispatched here - has reached out to the people of his new home, even sharing personal details online of his family settling in.

His efforts to draw closer to Koreans contrast with his predecessor Sung Kim, who kept a famously low profile during his three-year term despite his Korean-American identity, which earned him publicity when he arrived.

Lippert launched a Twitter account with the ID mwlippert on Nov. 2, just two days after he arrived in Seoul and started a blog titled “The Lipperts in Korea” at lippertsinkorea.blogspot.com on Nov. 14.

The blog posts are mostly about everyday experiences such as trying out Korean food including bibimbap (mixed rice bowl), pork bulgogi (marinated barbecue) and dubu jjigae (tofu stew), or visiting a baseball stadium to see the Korean Series. They are written in both Korean and English, an indication of his ongoing attempt to learn the local language.

Embassy officials say Lippert makes the Korean-language tweets on his own, whereas the lengthier blog posts are usually translated into Korean by embassy workers and later confirmed by him before they are released.

Photos and videos on both the blog and Twitter feed mostly feature his wife Robyn, who is pregnant with their first child, his beloved dog Grigsby and himself posing with people he has met.

Ambassadors from Rwanda and Panama also delivered their credentials to Park on Friday.