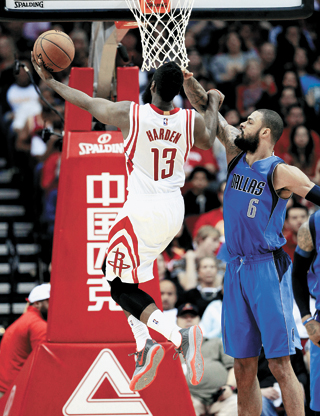 Rockets guard James Harden drives to the basket for two of his 32 points during the first quarter Saturday local time against the Dallas Mavericks at the Toyota Center in Houston. [USA TODAY/NEWS1]

James Harden scored 32 points, including five down the stretch, to help the Houston Rockets rally for a 95-92 win over the Dallas Mavericks on Saturday night.

Dallas led by four with less than a minute remaining before Harden made two free throws. Monta Ellis missed on the other end and Harden put Houston on top 93-92 when he made a jump shot and the ensuing free throw with 28 seconds left.

Harden stole the ball from Ellis and Trevor Ariza made two more free throws to seal the victory.

Dallas had a chance to tie it, but Dirk Nowitzki and Ellis each missed 3-pointers in the final seconds.

Ellis led the Mavericks with 17 points and Brandan Wright had 14 points and 11 rebounds.

Houston led by as many as 18 points and was up by eight when the Mavericks scored 13 straight, with seven from J.J. Barea, to take an 86-81 lead with about 3 1/2 minutes left.

Houston had turnovers, an offensive foul and even missed a layup as Dallas went on top. The Rockets scored their first point in more than six minutes when Donatas Motiejunas made a free throw with 3:14 remaining.

With Howard out with a strained right knee for the second game, the Rockets, who lead the league in 3-pointers per game this season, relied on long-range shooting heavily in the first half and had 13 by halftime. They cooled off in the second half and finished with 15.

Dallas scored four quick points to cut the lead to 11 with about seven minutes left in the third quarter. But Houston scored seven straight points after that to make it 73-55. The Mavericks missed four consecutive shots and had a turnover as the Rockets padded the lead.

Dallas finally got going after that - outscoring Houston 13-4 the rest of the quarter to get within 77-68 entering the fourth quarter.

The game was tied at the beginning of the second quarter before Houston used a 22-10 spurt to take a 51-39 lead about six minutes before halftime. That run was powered by six 3-pointers, including four in a row to end it.

Harden and Chandler got into a dustup a couple of minutes after hat. It started when Chandler seemed to inadvertently hit Harden in the face, knocking him to the ground on the continuation of a play where Harden was called for traveling.

Chandler tried to help him up but Harden snubbed him, then pushed Chandler from behind on the right arm as he walked away, drawing a technical foul.

The play was reviewed and Chandler was given a technical, too.

The Rockets trailed early before using a 13-2 run which started with three straight 3-pointers to take a 16-9 lead. Harden made the first one in that span and Patrick Beverley sunk the other two. AP