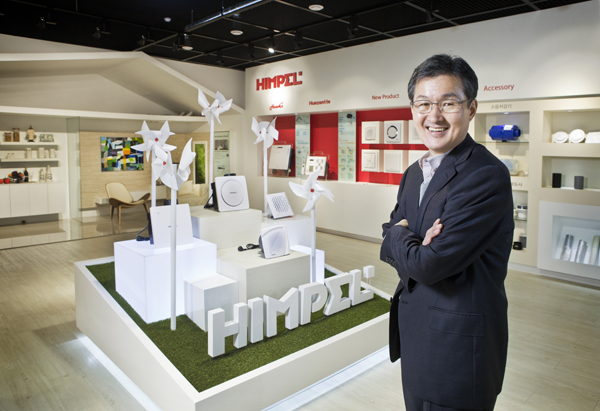 Kim Jeong-hwan, CEO of Himpel, a 25-year-old ventilation manufacturer, emphasizes the importance of clean air for health at the company’s product showroom in Hwaseong, Gyeonggi. By Park Sang-moon


Kim Jeong-hwan, who has been developing fans and ventilation systems for 20 years, preaches the importance of clean air. 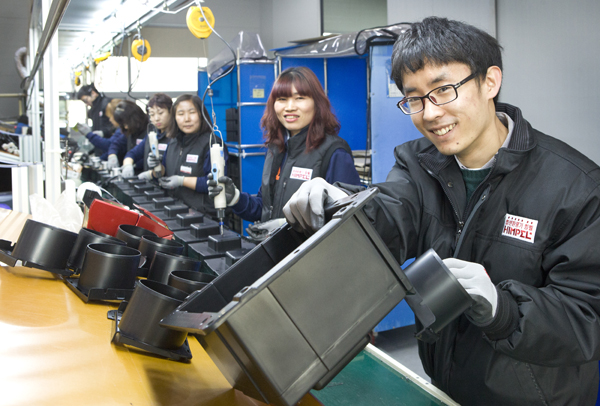 Employees wrap final products in boxes before shipment at the company’s factory in Hwaseong, Gyeonggi. By Park Sang-moon

“When you drive a car with all the windows closed, you can’t drive as far. It is the same thing. High CO2 levels indoors affect people’s activities significantly,” he added.

As the owner of Himpel, the largest ventilation company in the country, Kim requires all his

employees to measure the CO2 levels in their homes and urges they to maintain good ventilation to stay healthy.

“Clean air is the most important thing for us,” he said. “Healthy people produce good work and that is good for everyone.”

Kim also is obsessed with cleanliness. All employees and executives of Himpel clean their desks and nearby areas for 10 minutes every day before starting work.

“The company that makes the products should be clean so that our products turn out clean,” he said.

True to Kim’s standards, the floor and air at the main office building and factory in Hwaseong, Gyeonggi, were spotless.

Because Himpel already has more than 60 percent of the Korean ventilation market, it is turning its attention overseas.

“Our first target market is Southeast Asia,” Kim said. “Korean companies there get higher recognition thanks to the Korean wave and K-pop and geographic proximity. As Asians, those countries have a lot in common in terms of living, too.”

Q. What is your strategy for overseas markets?

A. Currently, we are preparing to enter the Southeast Asian market. We are testing our products in Malaysia and Indonesia at this moment. We have established a four-three-three plan. It aims to make domestic B2B (business-to-business sales) 40 percent of the total, B2C (business-to-consumer) sales 30 percent and export sales 30 percent.

This is a sales portfolio. For growth of the company, I recognized that we need such a plan. We are heavily influenced by the local construction market. In the past, at least 500,000 apartments were built annually, but that number has been reduced to 200,000 to 300,000. The reconstruction market could be another new market, but it is not big enough. So I think the domestic market, especially the B2B business, will face limited growth. And we are taking a new strategy to expand abroad. These days, Korean construction companies build the world’s best skyscrapers and apartments in many countries. We could capitalize on that opportunity, too.

What is the advantage of Himpel’s ventilation products?

When I first started the fan business, I benchmarked Japanese products. There were fans from Japan and Germany that I considered the standard. I chose Japanese products because they were quiet. Due to cultural characteristics, Asians prefer silent machines whatever they are. Let’s say cars. European cars are nosier than Asian cars. I thought fans should be quiet when they operate.

The Korean government requires fan noise to be less than 40 decibels. German products make 38 db of noise, while our products are 35 db.

Because I have been making fans for the past two decades, I can’t make the same thing every year. I should come up with new, innovative ones when new apartments are designed, just like construction companies try to build new concepts for apartments.

So, we are also making focused investment in design to make our vents stand apart from other vents. We have a fan with a cover that is designed to look like a leaf, and one that has cross stripes, an idea we got from window frames in Korean traditional houses. We have a great variety of fans in terms of design. Many foreign buyers are surprised by our designs.

Recently, we co-developed a fan with smart functions with the Korea Housing Finance Corporation. When you wake up at midnight and go to bathroom, turning on the bathroom light can put you in a daze. We have developed a dim nightlight that turns on with the fan. So, you don’t have to separately switch on a bathroom light and fan during the night.

The corporate culture at Himpel seems unique. Can you explain?

Our company’s mission is to contribute to human health through clean air and energy. As industries grow, a number of chemicals make our air harmful to us. According to a book by an experienced American reporter, indoor air is five times dirtier than outside air.

Large conglomerates and wealthy families purchase air filters for their offices and homes. But what the cleaners do is to filter dust. The important thing is not the dust filtering, but ventilation. Inside air should be extracted and fresh air needs to get in. Many people are not aware of this crucial fact.

Since apartments are getting taller these days, they are becoming harder to ventilate. I advise my acquaintances to have a bathroom vent switched on 24 hours a day to help send inside air out.

Keeping the fan on all day for a month adds only 1,000 won to your electricity bill. But people think that’s a waste. It’s not. Having the fan on helps lower the CO2 level in your home, keeping it between 600 and 700 ppm.

So I require my employees to keep the CO2 level at their houses around that level.

I like to be clean, so my products alo will be clean. We start the day by cleaning our office. A clean environment will produce better quality work and products. Because I prioritize health, I teach my employees some stretching and hypogastric breathing every morning.

One more unique factor of our company’s culture is to read books and write reviews. Some employees didn’t like the idea in the beginning, but we have been doing this for 10 years. I believe we should continue learning. A good thing about having employees read books is that I don’t need to nag a lot. What I want to say is in the books.

Do you think the business environment for small enterprises has changed under the government’s creative economy initiative?

It is good to get government support, but my personal goal is a zero-debt company. I tried to run the business with my own capital and many banks are quite surprised.

Recently, I got help from the Industrial Bank of Korea in order to build a factory. Another hard task for small businesses is to find workers and pay them well. I hope to see more improvements under the current government.