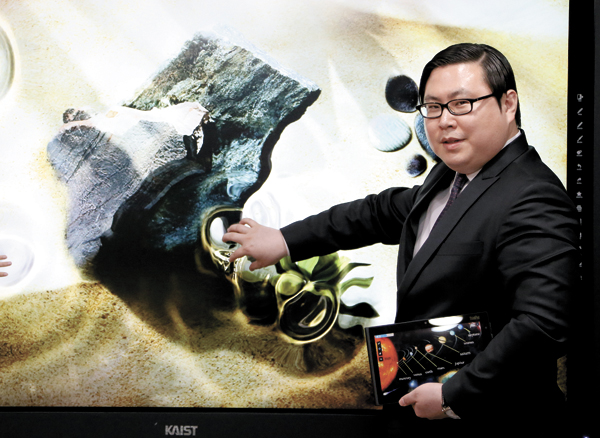 A Korean start-up that President Park Geun-hye publicly praised as an example of the success of her administration’s creative economy initiative a year ago has finalized a supply contract with a Chinese display giant.

Last week, the start-up signed a contract with one of China’s largest display makers, TCL, at its headquarters in Shenzhen.

The small display parts maker is an affiliate of state-run Korea Advanced Institute of Science and Technology (Kaist) and was often approached by local display giants for its work. But the company chose to partner with a Chinese manufacturer instead of a Korean one because of the way they approached business deals with the start-up, the CEO said. 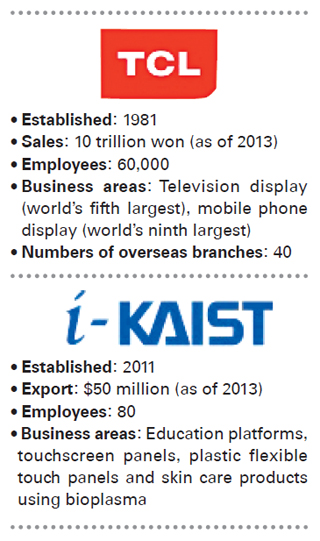 “In our relationship with local conglomerates, we were only allowed to meet working-level officials who asked for impossible and somewhat unreasonable contract conditions,” said CEO Kim Sung-jin. “I saw no future for cooperation.”

But the disappointment with local companies was followed by the contract with TCL, to which i-Kaist will supply display parts and operation platforms worth 500 billion won, including touchscreen displays, controllers and software that enables communication between displays. The two companies also said they would engage in joint R&D projects with the goal of commercializing flexible smartphone displays and household touch-screen tables by next year.

The 30-year-old CEO started at i-Kaist three years ago, along with four other display researchers at Kaist.

With its top-notch technology, the start-up developed the world’s first plastic flexible touch panel and became one of very few companies in the world to produce touch panels as large as 100 inches.

The company has developed a smart-learning platform called School Box with the huge plastic touchscreens, which elementary and middle school students can use as desks at school. When the teacher writes something on her own touchscreen panel, it will appear on the students’ desks. Unlike other touchscreens that only recognize one touch at a time, the desk picks up multiple movements on the display simultaneously and registers the touch four times faster than other screens.

Last year, the start-up exported $50 million worth of the learning platform and screens to six countries, including Turkey and Saudi Arabia. And it has more potential to be exported, since it supports 50 languages. Domestically, the platform has been bought by more than 400 elementary, middle and high schools.

In the wake of the success of the learning platform, Kim said top government officials like Prime Minister Chung Hong-won and former Deputy Prime Minister of the Economy Hyun Oh-seok visited the start-up’s headquarters in Daejeon to congratulate and encourage employees. Even so, the CEO said it was natural for him to choose to work with a Chinese company.

He said that a local conglomerate, which he didn’t mention by name, asked i-Kaist to make an exclusive contract and supply parts for 65-inch touch display worth 1 million won for about 300,000 won.

i-Kaist asked a TCL manager in July to suggest a supply contract, which was quickly passed on to TCL’s top executives. TCL CEO Aiping “George” Guo visited the start-up’s headquarters along with five other officials to start negotiations. Kim said Guo started by promising to pay the full 1 million won for each set of display modules.

After that, it took three months to complete the contract. The Chinese company took the contract seriously, even though it was with a small start-up. It sent a special team to secure the deal and sent high-level executives to Daejeon several times.

“TCL has until now only had business relationships with local conglomerates like SK, but it is the first time that the Chinese company has entered into a contract with a small Korean company,” Kim said. “I’m glad to be the first case of a small start-up showing it can partner with a large foreign company if they have good technology and ideas.”

TCL is one of the largest home appliance and electronics developers in China, specializing in televisions. The company recently started taking an aggressive approach in its smartphone display business after acquiring French device maker Alcatel. The company has 60,000 workers at its Shenzhen headquarters and 40 overseas offices.

TCL wowed the television market when it unveiled its super-sized curved ultra high-definition TV measuring 110 inches at IFA this year.

“If TCL introduces a touchscreen TV and flexible smartphones with i-Kaist’s technology, then the Chinese company will become a larger threat to local TV makers like Samsung and LG,” said an industry insider.