Debt, fears of deflation call for opposite policies

Debt, fears of deflation call for opposite policies 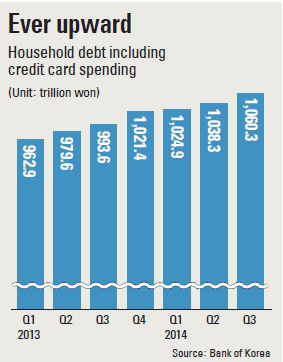 Is Korea’s ticking time bomb of a debt crisis threatening to explode?

While the country’s outsized household debts are growing at an exceptional rate and hitting new heights, concerns over possible deflation are prompting a state-run think tank to urge the government and the central bank to take more aggressive action.

Though three weeks are left before the central bank’s next monetary policy meeting, Gov. Lee Ju-yeol has to decide whether to stabilize the financial market and slow the growth of debt by raising interest rates or continue the Bank of Korea’s support of the government expansionary policy by making another rate cut.

According to the Bank of Korea on Tuesday, household debt, including credit card spending, broke the previous record set in the second quarter after adding an additional 22 trillion won ($19.8 billion) in the last three months to reach 1,060 trillion won.

This was a 2.1 percent increase compared to the previous quarter, and a 6.7 percent jump year-on-year - the fastest on-year growth since 2012.

Total household debt has been busting records for the last six consecutive quarters since the second quarter of 2013.

Even more alarming is the rate at which mortgage loans have been growing. In the third quarter, mortgages grew at their fastest pace since 2007, more than 7 percent.

The biggest cause of the third quarter’s debt growth was the easing of loan regulations by Finance Minister Choi Kyung-hwan. After stepping into the job in July, Choi eased regulations on mortgages to help revive the real estate market and give a jolt to the economy as a whole, which was sagging in the wake of the Sewol ferry sinking.

In order to achieve a targeted 4 percent growth for the year, the finance minister pushed ahead with the easing of the loan-to-value ratio and debt-to-income ratio for mortgages. The central bank joined in the effort by lowering the key interest rate in August and again in October, bringing the interest rate to its all-time low of 2 percent.

Since the second half, the total amount of loans, which were seeing decelerating growth, started to pick up.

The government and the central bank governor downplayed the chances of a crisis arising from household debt, stressing that the money was mostly borrowed by high-income households.

But the rate of loan growth is outpacing economic growth. Families’ debt burdens could grow faster than the incomes they use to pay the debts off. As a result, people would start tightening their spending and the economy could retract further.

Even exports, the main pillar of Korea’s economic growth, are weak because of heightened competition from Japanese products at a time of a weak yen and cheaper Chinese goods.

In a recent report, the OECD raised concerns over the household debt. The report noted that while it considers the expansionary spending pushed by the Finance Ministry appropriate, it was more cautious on the government’s real estate stimulus policies.

It said they could boost risks to financial institutions.

But if deflation is the bigger risk, the central bank may go ahead with its third rate cut this year next month.

Many major economies including Japan, Europe and lately China have loosened their monetary policy.

For the first time, state-run Korea Development Institute released a report warning the government of the possibility of the Korean economy facing deflation.

“Korea shouldn’t entirely rule out the deflation possibility and there should be clear messages from monetary policymakers,” said Lee Jae-joon, director for public investment at KDI, in the report.

The report compared Korea’s economy with Japanese economic conditions in the 1990s.

“Japan’s deflation occurred after 1998, but it could have been prevented if the government could read the sign of a falling GDP deflator,” it said.

“There have been pretty big errors in forecasting target inflation rates, which can serve as a problem in setting preemptive monetary policies,” it said.