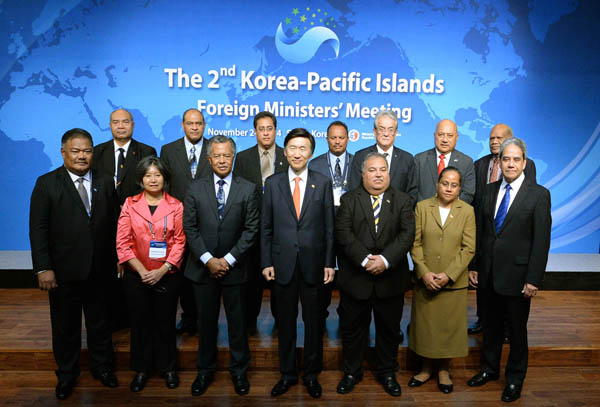 A meeting bringing together ministers of Korea and 14 Pacific island countries kicked off Monday at Hotel Shilla in central Seoul, serving as an opportunity to step up regional partnerships and enhance essential cooperation in areas such as climate and maritime affairs.

Minister of Foreign Affairs Yun Byung-se referred to the meeting, which convened for the first time since 2011, as an “excellent opportunity to broaden our diplomatic horizons” in his opening remarks on Monday.

While the Pacific island nations have traditionally forged ties with countries such as the United States, Australia, New Zealand, Japan and China, Yun added, “We are trying to bridge the wider Asia-Pacific region, not only in our part of the world, Northeast Asia, but also in the rest of the Pacific.”

The second Korea-Pacific Islands Foreign Ministers’ Meeting was themed “Building Inclusive and Enduring Pacific Partnership for Co-Prosperity.” The ministers focused their discussion on development aid, climate change and cooperating on maritime and fishery issues and released a joint statement on these issues afterwards. The four-day ministerial gathering also provided an opportunity to evaluate the progress made since the first meeting in 2011, where the Korean government agreed in a joint statement to continue contributing to the Pacific island countries’ economic development and expand trade and investment in areas such as marine resources, energy and tourism.

Seoul also pledged to double the annual financial aid it gives to the Korea-Pacific Islands Forum (PIF) Cooperation Fund to $1 million next year.

The PIF Cooperation Fund was established in 2008. The Korean government has launched various cooperation projects with Pacific island nations through the organization such as e-government training, health care and medical personnel training.

Over the past two decades, Korea has provided more than $50 million in official development assistance (ODA) to Pacific island countries to help with eradicating poverty and developing their economies. The meeting was attended by representatives of nations such as the Cook Islands, Fiji, Kiribati, the Marshall Islands, the Federated States of Micronesia, Papua New Guinea, the Solomon Islands and Tonga, along with Pacific Islands Forum Secretariat Andie Mary Fongtoy.

During the meeting, the ministers discussed the post-2020 climate regime and cooperation with the Green Climate Fund and Green Growth Institute in order to respond to global efforts to combat climate change concerns and to contribute to the region’s sustainable development.

The Pacific island ministers are expected to visit President Park Geun-hye on Tuesday and are scheduled to tour industrial facilities.