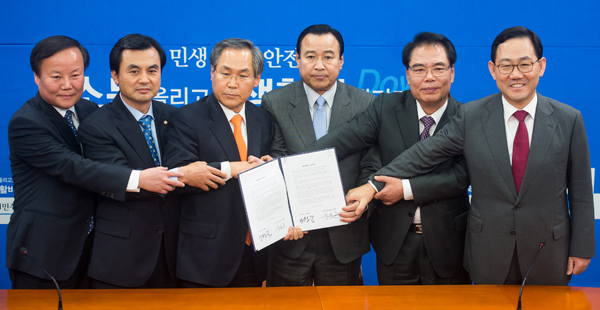 The ruling and opposition parties struck a deal on Friday over the contentious budget plan for next year, agreeing that the central government would pay for local authorities’ day care programs and the prices for cigarettes will rise 2,000 won ($1.80).

The agreement will allow lawmakers to speed up stalled deliberations over the 2015 budget bill. A legislative timetable was created Thursday to pass the financial plan for next year before the statutory deadline on Tuesday.

Led by their floor leaders, negotiators of the ruling Saenuri Party and the main opposition New Politics Alliance for Democracy (NPAD) sat down for a final discussion on Friday morning. After the tentative agreement was reviewed by each party’s lawmakers, the two sides held a press conference in the evening and announced the deal.

The parties agreed that the central government’s budget will be used to finance the controversial free day care program for young children.

The Nuri program, as it’s called, is an educational welfare project that aims to improve the overall development of children ages 3 to 5. But regional governments have threatened to discontinue the program, citing financial constraints.

Earlier this month, local government heads declared a “default” on welfare policies for next year and demanded that the central government step in with monetary aid.

The two sides agreed Friday that the city and provincial education offices will be primarily responsible for the day care program but that the Ministry of Education’s budget will be increased to provide support amounting to about 523.3 billion won.

The two parties also reached a consensus that the corporate tax rate won’t be increased next year but that the tax benefits and exemptions conglomerates have enjoyed will shrink. While a decision was not made on the exact figure, deputy floor leader of the Saenuri, Kim Jae-won, told reporters it would roughly amount to an extra 500 billion won in revenue based on last year’s figures.

The two sides also agreed on the most sensitive issue - the cigarette price hike. The Park Geun-hye administration’s plan to increase tobacco prices has been criticized as a way of increasing taxes on the middle class, even though the government had promised it would provide extended welfare benefits without raising taxes.

Under the agreement announced by the two parties, the price of a pack of cigarettes, which normally costs 2,500 won, will rise to 4,500 won.

Tax revenues from the hike will amount to roughly 8 trillion won, according to estimates.

As a part of the plan, the government will create a fire safety tax to improve the country’s firefighting capabilities. Twenty percent of the revenue from the tax will be collected by the central government and handed down to local authorities to upgrade equipment and increase firefighters’ salaries.

The ruling and opposition parties said the package of bills related to cigarette prices and the new tax system will be voted on at the plenary session on Tuesday.

While the Saenuri pushed for the 2,000 won increase on tobacco, NPAD lawmakers insisted that the amount is too high.

After the agreement was announced, the opposition party made it clear that it will still allow its lawmakers to vote freely on cigarette prices at the plenary session.

Along with the budget bill, the two parties said that other motions will be voted on at the plenary session on Tuesday, such as one to extend the mandate of Korean troops dispatched to Somalian waters.

The two sides agreed to hold a conference involving their chairmen and floor leaders to address other sensitive political issues that have been pushed aside for budget negotiations.

It was agreed that the opposition party’s demands to hold a special investigation into the Lee Myung-bak administration’s four-rivers restoration project, energy diplomacy and procurement irregularities and the Park government’s plan to reform the debt-ridden public servants’ pension will be discussed at the conference.

The conference will also deal with the creation of a special National Assembly committee on political reform, which will address the redistricting of the constituency map.