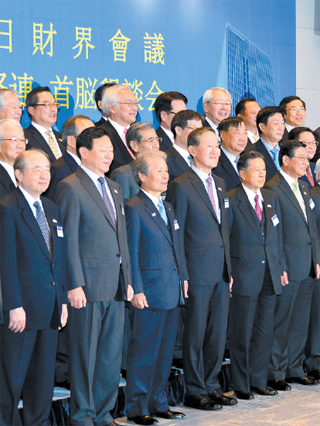 Korea and Japan resumed their joint business council for the first time in seven years on Monday and agreed at the meeting to improve their economic cooperation.

The nation’s largest business association, the Federation of Korean Industries (FKI), and the Japan Business Federation, called Keidanren, jointly held the 24th Korea-Japan Business Council at the Korean group’s conference center in Yeongdeungpo, southwestern Seoul. The annual council was last held in November 2007 in Japan but has been canceled every year since because of disagreements between the two countries over the Dokdo islets.

Huh Chang-soo, chairman of FKI, Sadayuki Sakakibara, chairman of the Japan Business Federation, and 45 business leaders from both countries discussed current economic issues and shared their opinions on Korea-Japan cooperation.

The organizations adopted a joint statement agreeing that they would continue to meet in the future and also push for a Korea-Japan summit.

They also said they would both agree to the Free Trade Area of the Asia-Pacific by 2020, and make progress on the Korea-China-Japan FTA, for which negotiations began in 2012, as well as the Regional Comprehensive Economic Partnership, a trade deal involving both countries and Asean.

“In order to integrate the Asian economies and to move ahead in the global economy, Korea and Japan must join forces together,” said Huh of FKI.

Sakakibara emphasized that stronger relations with Korea are important, and to reach that goal, companies from both countries must reinforce trade ties in the Asia-Pacific region.

The two business federations will also work together in tourism, finance, trade investment, energy and on infrastructure projects in other countries.

“At the meeting, the two sides decided that they will avoid excessive competition in emerging markets, and instead establish solid cooperation to achieve the best possible results,” said Eom Chi-sung, head of the international team at FKI.

The countries also agreed to work together to come up with measures to counter low birthrates and the aging population, construct a submarine tunnel between Korea, Japan and China, simplify the visa processes between the three countries, and boost East Asian capital markets.