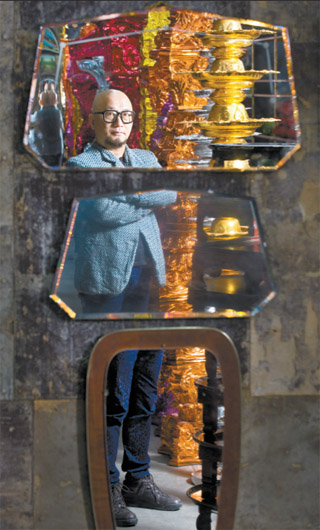 Choi Jeong-hwa, who calls himself the “always almost artist,” at his studio in central Seoul with his “Present of the Century” series. By Park Sang-moon

One thing is clear about the work of Choi Jeong-hwa. Whether you like it or not, you could never say it is boring.

Just look at one of his latest pieces, which is on display at the entrance of the Leeum, Samsung Museum of Art in central Seoul as part of the “Beyond and Between” exhibition celebrating the museum’s 10th anniversary.

The black column is majestic at first glance. It is more than seven meters (23 feet) high and has classical - perhaps Corinthian - decorations.

But a closer look will reveal it is a stack of column capitals that resemble those of Ancient Greece. In addition, it is made of plastic.

Its smaller sisters are on show in Park Ryu Sook Gallery near the Cheongdam crossroads in southern Seoul as part of a rare solo show by the artist at a commercial gallery. Coated with vivid chrome colors such as red, hot pink, gold and green, they shine like chocolates wrapped in aluminum foil.

“Their classical motifs are cast from the real columns ... oh, not real ancient Greek columns, but columns for contemporary wedding halls in Korea,” Choi, who calls himself the “always almost artist,” told the Korea JoongAng Daily with a smile at his studio in central Seoul.

The KJD met the 53-year-old, one of Korea’s best-known artists in the international art scene, last month.

Wedding halls in Korea are notorious for their kitsch designs that clumsily imitate Western classical and Baroque styles. They reflect the country’s hasty Westernization and loss of tradition that accompanied its rapid industrialization. Choi’s columns, a series titled “Present of the Century,” have satirical and ironic tones as a result.

But their charm means they do not give off any heavy negativity.

Many other pieces by Choi have similar mixed tones.

Among them is his “Alchemy” series. A large version of it - an 18-meter work that looks like a straight, long chandelier - is now hanging from the Leeum’s famous rotunda.

Smaller versions that resemble floor tower lamps stand in Park Ryu Sook Gallery. They seem to be made of splendid Venetian glass but are in fact created from cheap plastic containers.

“In my works, plastic has become a jewel. That’s alchemy,” Choi said. “I even pursue the aesthetics of the sublime by stacking up on plastic baskets [which are common in Korean markets].”

Those who saw Choi’s work “Kabbalah” at Daegu Art Museum as part of a solo show last year would agree. The giant installation, which consists of thousands of red and green plastic baskets, seemed like a visualization of an energy flow rhythmically ascending from the earth to the sky. 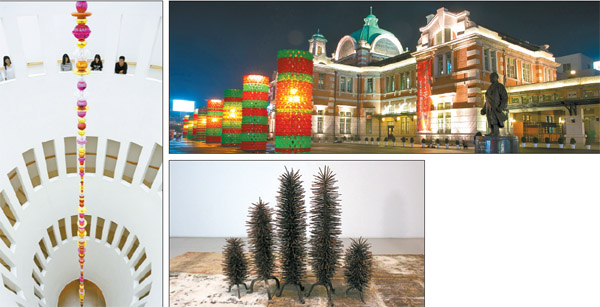 Art lovers can see Choi Jeong-hwa’s latest pieces at the Leeum in central Seoul and at Park Ryu Sook Gallery in southern Seoul. “Alchemy - Iron Age,” left, is part of his solo show at Park Ryu Sook Gallery. “Alchemy,” far left, installed in the Leeum’s rotunda is part of the group show “Beyond and Between.” “Everyday of Flowers,” above, which was installed as part of his solo show at Culture Station Seoul 284, was recently removed as the show finished. Provided by the institutions

Similarly to this, Choi’s works, which are made of mass-produced cheap objects in garish colors, not only have a sense of humor and satire but also a sense of the sublime.

Leeum curator Kwak June-young said that Choi’s art can be described with the same words that are related to Korea’s street and market culture such as “saengsaeng [vivid], champon [mix], naljo [fabricate], ppali ppali [quickly, quickly] and saeksaek [many-colored].”

“These adjectives combine the meanings of affirmation, negation, praise and resistance in an exquisite way,” she said.

“Ajumma [middle-aged Korean women] in markets ... their unique sense of beauty is one of the most important sources of inspiration to me,” Choi said. “I often get surprised at the creativity and original beauty of the objects I find in the markets, so I sometimes juxtapose them with my ‘art’ work, questioning if ‘art’ is better than the objects.”

In that respect, Choi can be considered a descendant of Marcel Duchamp. The French artist found a urinal, signed it and brought it to an exhibition in 1917, declaring that it was art. Through the move, he overturned conventional ideas about what can or cannot be considered art.

“In reality, the institution [the ideas and system shared by museums and academies] decides what is art,” Choi said. “But I think everything is art.”

Choi majored in painting at Hongik University’s art college, one of Korea’s top art schools, but he has played the role of an outsider. He broke out from Korean art society’s dichotomy in the 1980s, which focused on abstract art by the elite and so-called “people’s art” by activist artists. He didn’t even stay within the field of fine art. He founded Gasum Studio in 1989 for activities encompassing stage art and commercial design.

But sometime in decades to come, Choi noted, “the institution will finally collapse and everyone will become an artist in this digital and mobile era.” 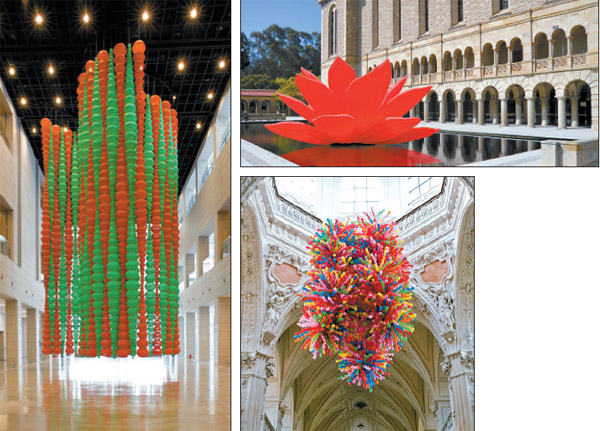 Choi looked like a prophet when he said those words. Quite fittingly, considering he is greatly inspired by shamanism.

“You know there is a theory that artists originate from shamans,” he said. “Shamans link the earth and heaven, share visions with people and heal people. That’s what I want to do.”

Choi explained that many of his works are in the shape of a column, so that they resemble human beings that stand erect while linking heaven and earth.

His characteristics as both an artist and shaman were shown in “Everyday of Flowers,” a group of thick columns, created out of piled-up, illuminated plastic baskets. The site-specific work was for the street in front of Culture Station Seoul 284 as part of a large-scale solo exhibition at the renovated old Seoul Station building this autumn. He created the work with the paid help of the homeless who live around the station.

“There have been many foreign curators who proposed the same exhibition as the one in Culture Station Seoul 284 should be held their regions, but my answer is that it cannot be the same,” Choi said. “Exhibitions should be site-specific - they should communicate with the spirit of the sites. So when I get offered an exhibition, I go to the site several times before planning the show, visiting flea markets and folk art museums in the regions in particular.”

Choi said he prefers site-specific public art projects but that he is also making a new attempt at making collectible work, the results of which are now on display at Park Ryu Sook Gallery. Pointing to the elegant tower-shaped sculpture made of iron hammer heads at the gallery, he said, “In fact, some polished qualities inhere my sense of beauty, which I have intentionally avoided in my work. The qualities are expressed in these ‘collectible’ pieces.”