In 2015, property market could get a major boost

In 2015, property market could get a major boost 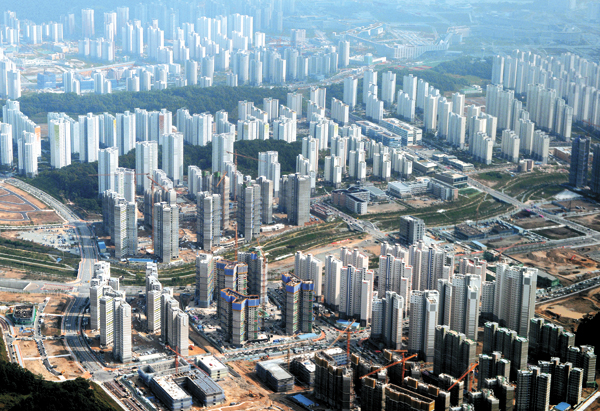 New apartments under construction in Sejong City, South Chungcheong, are slated to be completed next year. The new buildings are expected to help ease the current short supply of jeonse houses nationwide.[JoongAng Ilbo]

Will a series of policy changes set to take effect next year lead to a real estate boom?

A number of market-boosting measures that were announced on Sept. 1 by Finance Minister Choi Kyung-hwan are expected to pass the National Assembly next year. If the measures pass, the property market could see some changes.

The policies are aimed at reviving the stagnant domestic real estate market by removing barriers and relaxing complicated rules, from the application process for a new apartment and tax waivers to building reconstruction and loans.

To encourage home buyers and renters, the maximum commission that a realtor can charge next year will be cut in half. 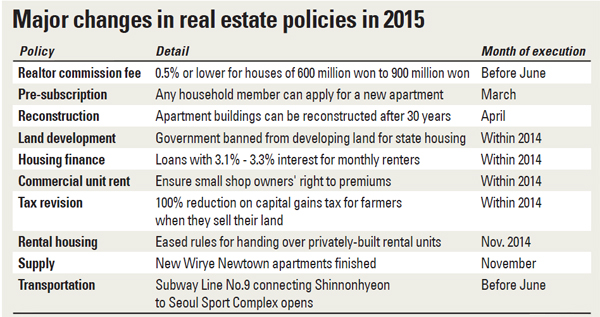 The commission on officetels, or single-room studios equipped with a kitchen and bathroom, will be limited to 0.5 percent for buyers and 0.4 percent for renters. Now, the commission ceiling for both is 0.9 percent of the price.

Next year, the competition for an apartment in a new building is expected to intensify due to eased rules.

The government is also expected to expedite the screening processes for applicants. The process of applying for a government-built housing unit smaller than 85 square meters (914 square feet) will require three steps next year, down from the current 13, while the application for privately-built apartments will be two steps.

The minimum conditions to qualify for a new apartment will also be eased to give more opportunities to Seoul residents. Now, only applicants who have made two years worth of payments into a special bank account for housing can win the lottery for a new home. In March, a new rule will allow anyone who has paid into the account for six months to compete for the apartments.

To get more people to buy homes, the government will ease regulations on debt redemption for housing loans. Now, if a person borrows money from a financial institution to buy their house, they must pay the loan back in full even if the price of the property drops. But in July, the government will test a policy to reduce that burden by allowing borrowers to give up their home ownership instead of paying back the loan.

One deregulation that took effect in November allows owners of multiple homes worth less than 900 billion won to register for a mortgage-backed pension program, in which the owner can receive a small amount of money for monthly living expenses from the government. Previously, the rule only applied to people who owned one house.

The government also created measures to help people who pay monthly rent, for which the deposit and monthly installments are more expensive than ever due to a shortage of houses available for jeonse, a lump-sum rental deposit.

The government will launch a program in January to help these people pay their monthly housing bills. Under the program, a person can borrow money at a low interest rate of 3.1 percent to 3.3 percent, down from the current 3.3 percent.

As monthly rent becomes more common and jeonse homes are sparse, the Ministry of Land, Infrastructure and Transport on Nov. 17 started a tax-waiver policy for businesses in private buildings that pay monthly rent. The plan allows tenants on monthly rent to transfer the apartment to another person with the home owner’s consent.

The government also decided to waive the transfer tax for property owners in rural areas who are trying to sell land that they have lived on for at least eight years. The policy applies to all land within a 30-kilometer (18-mile) radius of the owner’s home, as opposed to 20 kilometers before.

Local builders are also expected to stay busy next year if the government approves a measure to reduce the number of years before a building can be reconstructed from 40 years down to 30. Also, buildings found to have structural imperfections will be permitted to be rebuilt immediately. The change could go into effect as early as April.

By the end of next year, the government will terminate the Housing Site Development Promotion Act, which was put in place to prevent state-run builders such as the Korea Land and Housing Corporation (LH) from building new apartment complexes. The government came to the conclusion that the public housings projects resulted in oversupply, leading to a drop in overall home prices.

Meanwhile, the opening of subway line extensions is expected to draw people to buy houses near the new stations. Seoul subway line No. 9 will open augmented sections from Sinnonhyeon Station in 2015 that will connect it to Sports Complex Station, which is on line No. 2 in the Jamsil area. New subway lines will also open in Incheon and Daegu, and one will connect Songdo to Incheon. These regulatory changes are expected to continue to add to market confidence.

The measures to support real estate announced by Finance Minister Choi in July and September have helped the market post its biggest interest in apartment presales in 11 years.

In the first 11 months of this year, more than 342,300 apartment units that were either scheduled to be built or were already under construction were purchased, which is a 21 percent increase compared to the previous year. The last time the number of pre-constructed apartment sales reached this high was in 2003 when more than 356,000 apartments were bought.

Market experts are projecting that while the supply of apartments in the greater Seoul area is likely to remain at the same next year, the supply in the provincial areas is expected to shrink.

“In 2015, roughly 58,000 households are expected to relocate as the reconstruction and redevelopment projects in the four major district in Gangnam - Gangnam, Seocho, Songpa and Gangdong - will start,” said Lee Seung-jin, a researcher at Budongsan 114, a company specializing in real estate information. “Additionally, the minimized requirements to apply to get a new apartment will further attract buyers who are interested in purchasing a new home.”

One of the biggest changes in recent years is the demand for new apartments. During the mid-2000s, many apartment buyers were looking for aging apartments particularly in Gangnam District, considering it an investment. Many have profited from the reconstruction and redevelopments, which not only expanded the size of the apartments but also boosted their value. However, apartments have lost their appeal as an investment since then because their value has not risen much.