Hanwha chief has his work cut out

Hanwha chief has his work cut out

Hanwha Group Chairman Kim Seung-youn was in his office at the company’s headquarters in downtown Seoul and is expected to resume his leadership of the No. 1 energy conglomerate.

It will not be Kim’s first comeback.

In September 2007, he stepped down as CEO of Hanwha Corporation after being sentenced to 18 months in prison and three years’ probation for assaulting employees of a bar in retaliation for a fight in which his son was beaten.

But he returned as CEO the following year after a presidential pardon.

This time, Kim will be greeted by rumors that the big deal with Samsung was designed and ordered by the chairman.

After his return in 2008, he tried to take over Daewoo Shipbuilding and Marine Engineering. Although the deal was never consummated, it was a clear sign that Kim was back in the saddle.

The situation lately has been similar. However, there is speculation in the business community that Kim will face more difficult challenges due to disappointing performances by the conglomerate’s core businesses.

Acquiring the Samsung affiliates won’t be easy. It will be a challenge for the chairman to secure the financing to buy Samsung’s defense and chemical companies: Samsung Techwin, Samsung Thales, Samsung General Chemicals and Samsung Total. In addition, he faces vehement opposition from employees from Samsung affiliates.

Hanwha Group has been focusing on solar energy, but has failed to recoup its investment. The solar business is a major hurdle that must be dealt with immediately. The conglomerate has invested more than 3 trillion won ($2.7 billion). However, Hanwha Chemical, its solar energy business, in the second quarter posted 501.6 billion won in revenue with 1.4 billion won in operating profit. But even that small amount of profit has declined steadily to the point where the affiliate lost 200 million won in the third quarter.

The operating loss “was largely because of the significant drop in demand for solar power with international crude prices falling,” said an industry source.

The fact that Samsung has folded its solar energy business and LG Chem is giving up on its investments in the industry further raise concerns among investors over Hanwha’s continuing pursuit of power from the sun.

Another problem is Hanwha’s construction business, which has been eating into the group’s profits. 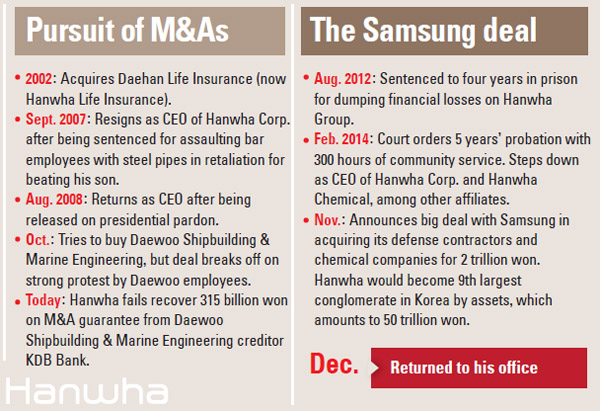 Hanwha E&C in February 2011 won a $1 billion project to build a 230-megawatt power and desalination plant in Yanbu, Saudi Arabia. Under the initial plan, the plant was supposed to be completed by the end of this month. However, due to problems in cost estimation and design, the project is short 400 billion won. Hanwha Corporation, a majority shareholder of the construction company, covered the shortfall using Hanwha Life Insurance shares as collateral.

The Korean conglomerate also is cautious about not making the same mistake on its biggest overseas construction project in Iraq.

“For now, everything is working smoothly,” said an overseas construction industry official who requested anonymity. “But Hanwha could be faced with astronomical financial losses if anxiety over modifications and [design] changes builds.”

Hanwha was forced to back out on the acquisition of Daewoo Shipbuilding and Marine Engineering more than half a decade ago due to strong protests by the shipbuilder’s employees.

In 2008, Hanwha signed an agreement to take over the shipbuilder with its main creditor, Korea Development Bank, at 6.5 trillion won. To guarantee the contract, Hanwha paid 322.5 billion won. But after three months it was forced to give up on the acquisition and filed a lawsuit against KDB Bank.

Already similar signs are popping up with strong opposition from the Samsung affiliates’ work force, which has formed a union. Samsung is known for having no labor union in any of its affiliates, although it does have a negotiation team.

Samsung affiliates’ employees are paid about 25 million won less on average than Hanwha employees, and they are concerned about layoffs.

When reporters asked about the strong opposition from Samsung employees on Dec. 3, Kim replied, “It’s their own problem.”

Kim has expanded his business empire since he became chairman in 1981 through numerous M&As involving companies on the verge of bankruptcy. This time, the situation is different. Even if the Samsung affiliates haven’t had outstanding performances, they were not in a desperate situation.

“It seems the M&A was announced to signal Kim’s return, but it looks as though it lacks the acceptance of the acquired companies,” said a member of the business community. “When two organizations overcome their different corporate cultures, the M&A will be successful.”

Securing the funding needed for the acquisition will be another challenge. There are rumors that the recent deal with Samsung includes the possibility of selling Hanwha Life Insurance to Samsung.

Currently, Kim is only the majority shareholder of Hanwha affiliates since he gave up his CEO status at seven companies, including Hanwha Corporation, in February.

The court sentenced Kim to three years in prison term with five years’ probation and fined him 5.1 billion won fine in February after Hanwha appealed a four-year prison sentence in August 2012 for Kim causing major financial losses on his company.

Kim was sent to jail in January 2013, but spent only four months after his health deteriorated. Since then, he has been going to court and receiving treatment at Seoul National University Hospital.

As he is no longer the CEO at the affiliates, Kim is currently limited to exercising his rights only as a majority shareholder.