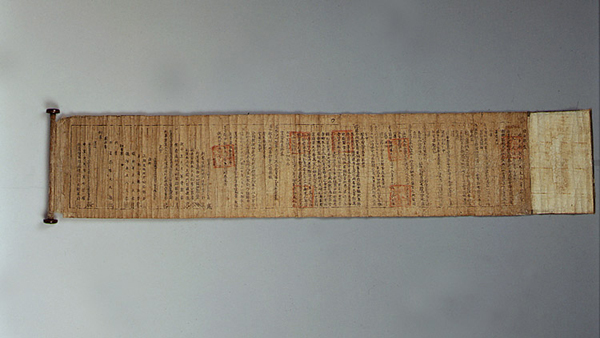 This is a royal letter bestowed to Sim Ji-baek by order of the king to recognize him as a Meritorious Vassal, or a worthy lord. It was certified in October in the sixth year of King Taejo’s reign (1397) during the Joseon Dynasty (1392-1910).

The document, measuring 140 centimeters (55 inches) wide and 30.5 centimeters long, had been passed down within Sim’s descendents and is currently kept at Dong-A University Museum.

In order to increase the number of Meritorious Vassals, the Gaeguk wonjong gongsin (a state department created to recognize people for their distinguished service in helping to establish a new dynasty) was implemented as a reward system in early Joseon.

Sim Ji-baek was one of the 74 who received a nokgwon (a royal certificate given to a vassal recording his name, title and privileges) at the time, along with land, as a prize.

The royal letter says that the parents, wife and descendants of a meritorious vassal received gifts of land and titles, which is a historical fact that can be found in the Annals of the Joseon Dynasty.

The certificate is a rare document of early Joseon Dynasty, printed with woodblocks in the idu system (an old Korean alphabet using Chinese characters before Hangul was invented).

Among documents printed with woodblocks from early Joseon Dynasty that exist today, the certificate is considered the best preserved in all of Korea. It features the trademarks of the early woodblock prints, such as irregular sized letters and uneven lines, printed on a scroll.