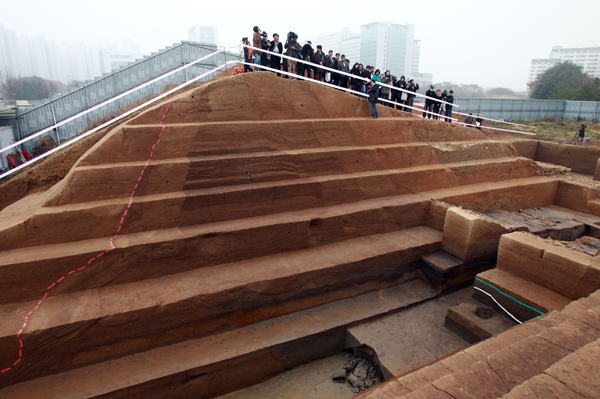 Pungnap Toseong, a fortress from Korea’s Baekje Kingdom (18 BC-600 AD), was recently discovered to be built between the third and fifth century. Korean archaeologists also found that the fortress was as tall as a five-story apartment building and that at least 1.38 million laborers were conscripted for the construction. Provided by the Cultural Heritage Administration

Most of the important archaeological discoveries in Seoul happen downtown around Gwanghwamun and City Hall. This area, north of the Han River, is dubbed by locals as “inside the four gates,” referring to the major doorways of the Joseon Dynasty (1392-1910).

But historical findings are made in southern Seoul, too.

The most active archaeological area is in Songpa District, where fortresses from Korea’s Baekje Kingdom (18 BC-600 AD) were built.

Seoul served as the capital of Baekje for 500 years - between 18 B.C. and 475 A.D. - after which the main city was moved to Gongju and Buyeo County in South Chungcheong.

Many relics were found from Pungnap Toseong since it was discovered in the late 1990s. They include roof tiles (left) and pottery (middle), among other items. [JoongAng Ilbo] There is a recreation of the fortress at Seoul Baekje Museum (right). Provided by CHA

One of the fortresses - Pungnap Toseong - was unearthed by accident in the late 1990s when an apartment complex was being built. Archaeological exploration has been taking place in the area ever since.

After a three-year interdisciplinary study of the area, Korean archaeologists announced on Dec. 3 that the soil fortress - Korea’s Historic Site No. 11 - was built in stages since the mid-third century. They also found that it was as tall as a five-story apartment building and that at least 1.38 million laborers were conscripted to construct it.

“Finding out when Pungnap Toseong was erected and how it was constructed has been a major task in the fields of Korea’s archaeology and ancient history,” said Yu Eun-sik, a researcher at the National Research Institute of Cultural Heritage.

Yu explained that the interdisciplinary study was the first of its kind in Korea, involving people with knowledge of archaeology, image engineering, geophysics, geology, civil engineering, soil science and nuclear physics, among others.

Originally, Korean archaeologists believed that the construction began as early as the first century and finished in the mid-third century.

Korea’s National Research Institute of Cultural Heritage, which operates under the Cultural Heritage Administration, also ascertained that the fortress was 10.8 meters (35.4 feet) high when it was first built but that its height was extended to 13.3 meters as it was enlarged in later decades.

“This means that the Baekje people piled up soil as high as a five-story apartment building in the area close to the Han River and constructed a massive fortress measuring 3.5 kilometers [two miles] in length,” the research institute noted.

Based on these measurements, the National Research Institute of Cultural Heritage also said it believes the construction involved at least 1.38 million workers. It based its assumption on information found in Tongjeon, a record from 801 that is similar to an encyclopedia, from China’s Tang Dynasty (618-907).

But how were the people of Baekje able to build such a large, sturdy fortress so close to the river?

Korean experts made the educated guess that Baekje’s people resorted to an ancient civil engineering technique in which people would use shells and tree branches to prevent land from sinking.

However, it turned out that was not the case: Pungnap Toseong was built with soil whose composition was clearly different from natural earth found in the surrounding area, according to the institute.

It shows that the Baekje people likely had the capability to examine the ground and the structure’s weight and also blend various soils to make the most of their characteristics.

Goguryeo was known for its military prowess and covered a massive territory that included not only today’s North Korea, but also southern Manchuria. Silla, on the other hand, was known for its artistic achievements and also for unifying the three kingdoms.

Compared to Goguryeo and Silla, which have evident characteristics, Baekje has not been discussed so much in history.

However, in recent years there have been increasing attempts to shed new light on this dynasty. The theme of the Seoul Lantern Festival last year, which ran between Nov. 1 and 17, was “Hanseong Baekje - Dream of a Thousand Years.”

Hanseong Baekje refers to the part of Baekje during which Seoul (formerly known as Hanseong) was its capital.

Seoul Baekje Museum, which opened in 2012 in Songpa District, has been hosting special exhibitions on Baekje. The latest were “Heroes of Baekje” (June 24 to Aug. 31) and “Palace of Baekje” (March 25 to June 1).

There are several festivals related to the dynasty, with the most famous being the Baekje Cultural Festival, hosted by Gongju and Buyeo County. There was a conference in August where policymakers and related experts discussed ways to make this festival international.

Lee In-sook, the director of Seoul Baekje Museum, emphasized at the conference, “Many of Korea’s traditions - like the food, clothes and housing - can be traced back to Baekje [as they bear resemblance to the historic sites and relics of Baekje].”

In addition, the Korean government aims to register the Baekje Historic Areas - which stretch from Gongju to Iksan - as a Unesco World Heritage site by 2017.