Problems pile up for Seoul’s mayor

Problems pile up for Seoul’s mayor 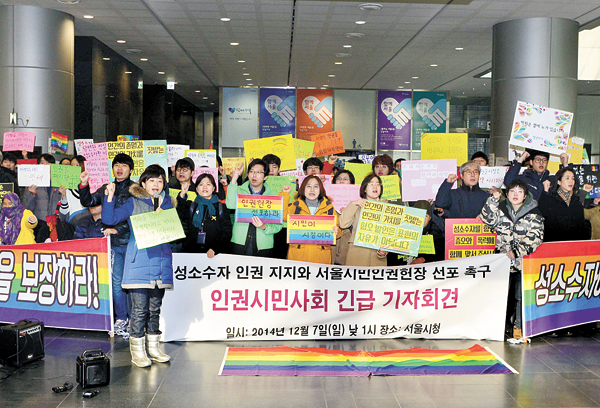 Gay rights activists stage a rally in the lobby of the Seoul City Hall on Sunday to urge Mayor Park Won-soon to adopt a charter for human rights. [NEWSIS]

The alliance has been at City Hall since Saturday, demanding that the Seoul Metropolitan Government adopt a human rights charter developed by a citizens’ committee.

And the scene became uglier when a dozen members of a Christian organization staged an opposing rally at the hall with pickets that read, “Homosexuality and Gay Marriage Out.”

Seoul city called off the human rights charter on Nov. 30, citing the committee’s inability to agree on five clauses, including one stipulating that discrimination based on sexual identity should be abolished.

Many of the policies Seoul Mayor Park Won-soon promoted after his re-election in June, including the charter issue, have come to a deadlock, causing his leadership to be called into question.

His idea to turn an overpass next to Seoul Station into an elevated park, for example, is facing strong opposition from Namdaemun Market merchants.

After the mayor announced in September that the park will be finalized by 2016, criticism began to emerge, culminating in a demonstration in front of city hall on Nov. 24.

The merchants are claiming that the project will ruin the market unless detour routes that pass through it are constructed. They also say that Park isn’t reflecting public opinion in the park’s plans like in his first term.

The city government held a public hearing on Monday over the issue, but it was not resolved.

Park’s effort to turn the capital into a pedestrian-friendly city is also facing opposition as representatives of Jogye Temple in central Seoul have officially expressed concerns over the narrowing of nearby roads to expand sidewalks.

In addition, the mayor has become embroiled in a public argument between Seoul Philharmonic Orchestra’s President Park Hyun-jung and Chung Myung-whun, the orchestra’s artistic director.

After the president was accused of using abusive language and sexually harassing orchestra staff, she claimed the artistic director has run the public orchestra like a private organization and that the mayor and Chung are working together to try to oust her.

Some local government officials point out that Mayor Park should step up and resolve the issues.

“I think everything went wrong after he announced the elevated park plan,” said a City Hall official, “possibly because Park forgot to prioritize persuading the public over promoting plans.”

But others say that Park should not be too worried because criticism is expected to some extent.

“It is natural to see some for the plan and some others against the plan,” said another Seoul city official.

An additional headache for Park is the Seoul Metropolitan Council. Most of the members belong to the main opposition New Politics Alliance for Democracy (NPAD), but the council is critical of the NPAD mayor when it comes to his opinions over the elevated park or the philharmonic orchestra issue.

“... Park won’t be able to solve the problems alone,” said an NPAD councilman.