Lending to technology start-ups takes off

Lending to technology start-ups takes off 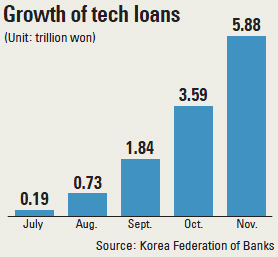 A start-up created last September has a patent on enriching and refining waste produced in the manufacture of computer chips.

It is the first such technology in Korea, but the company lacked the collateral required for bank loans and was unable to secure the capital needed to build production facilities.

But the start-up recently took out a 1.3 billion won loan from Shinhan Bank after the Korea Technology Finance Corporation (Kibo) and the bank conducted due diligence on the company and evaluated its technology. In addition, the technology-based company received 500 million won for management.

Thanks to the loans, the start-up signed a contract with a conglomerate and expects about 1.5 billion won in annual revenue.

Both state-run and commercial banks offer loans without collateral to companies that have exclusive patents.

A game company launched last year after developing a role-playing game for the past five years couldn’t get a loan because it had virtually no sales.

It recently got a 900 million won loan from Hana Bank without collateral. The bank also supported the game maker with a 20 trillion won line of credit.

“We looked at many games at game fairs and judged that the company’s game had some differentiated features and would be popular in the Chinese market,” said a bank official.

Since July, banks have been under intense pressure to provide more loans for start-ups under the government’s creative economy initiative. Banks had been hesitant to lend to start-ups because of the possibility of default, but they are following the government’s guidelines.

According to the Korea Federation of Banks (KFB) on Monday, the total of technology-related loans jumped thirtyfold to 5.88 trillion won since July. The loans were issued based on evaluations by the three government-designated technology credit bureaus (TCBs) - Kibo, Korea Enterprise Data and Nice Information Service.

The largest lender was Shinhan Bank at 1.3 trillion won. Prior to July, the state-run Industrial Bank of Korea (IBK) was the biggest lender to tech-based start-ups. As commercial banks began to increase capital allocated for lending under the government’s technology finance initiative, Shinhan Bank easily outstripped IBK. Such commercial banks have established their own standards for evaluation of technologies, too.

Commercial banks are aggressively expanding technology-based loans not only because of government pressure, but because of the need for new growth engines.

“We have had our own technology-based loan programs for 18 months,” said one bank official. “The government’s drive helps us promote the programs more actively.”

“Before, we had to examine the finances of start-ups,” said an official at Woori Bank. “Now we can lower the risk of delinquency as we get to know more about the companies.”

Yet there are concerns about the rapid pace of growth of technology-based loans.

Some say the banks’ own evaluation standards lack objectivity. Not only the banks, but the three TCBs have differences in grading.

The financial regulator is working on legislation that would require public research institutions and accounting firms to act as evaluators.

“If there are more technology evaluation institutions, the quality of evaluations would become more objective and fair,” an FSC official said.

Banks will also need employees with expertise in technology. Shinhan and Woori Bank have formed task forces and are hiring experts in order to conduct more thorough evaluations.

“Technology finance has inevitable risks,” said Kim Kyung-hwan, professor at Sungkyunkwan University. “In the early stages, the only thing banks can look at is technology, but companies established for more than three years should be examined more carefully by looking at financial, marketing and technological capabilities.”