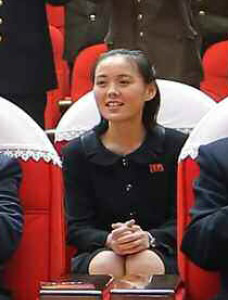 According to the Ministry of Unification, Kim was limping severely in a video clip recently aired by the state-run Korean Central TV. He was limping particularly painfully at an event with female pilots that took place at the end of last month. The Rodong Shinmun, the Workers’ Party’s newspaper, reported Kim’s visit to the air base on Nov. 28 with photos, but no video was aired until Sunday afternoon.

The 30-year-old ruler of the North developed problems with his leg last spring. After his condition deteriorated, he withdrew from public activities for 40 days.

South Korean intelligence authorities have confirmed that Kim received ankle surgery by visiting French, Chinese and Russian doctors. The sources said there was a high possibility of a relapse after Kim quickly resumed his public activities.

Meanwhile, intelligence officials said Kim Yo-jong, the 25-year-old younger sister of the North’s ruler, has quickly risen in Pyongyang’s inner circle, possibly being groomed to succeed her brother in case of an emergency.

At the end of last month, Pyongyang revealed that she is a deputy director of the Workers’ Party’s Central Committee. It was the first time the North revealed her official title in a media report, although it did not say which department of the party she belongs to.

North Korea observers note that it took only three years for the youngest daughter of Kim Jong-il, who shed tears at her father’s funeral, to rise to a powerful position in Pyongyang’s leadership.

When she attended a voting session for delegates of the Supreme People’s Assembly in March she was only referred as a “responsible worker of the party.”

“Kim served as a manager of the Workers’ Party’s Propaganda and Agitation Department,” said a South Korean intelligence official. “Under the assumed name Kim Ye-jong she oversaw the invitation of former NBA player Dennis Rodman to the North.”

Kim’s new title, a deputy director, is equivalent to a vice minister in South Korea but analysts said she is far more powerful than any other vice minister. According to the sources, a new saying has been adopted by Pyongyang’s inner circles that says, “All roads lead to Comrade Yo-jong.”

After Kim Jong-un came back from his 40-day medical seclusion in October, his sister has accompanied him at various public events.

A senior intelligence official in Seoul said there is a high possibility that she is already married. North Korea observers said the Kim Jong-un, since he is only 30 years old, has plenty of time to decide on the issue of his successor. Kim currently has two young daughters.

It’s entirely normal for a member of the Kim dynasty to be the second most powerful person in Pyongyang. Observers said Kim Yo-jong, who inherited the “Mount Paektu bloodline,” fits that bill.

“Mount Paektu bloodline” refers to the descendants of Kim Il Sung, the founder of the North, who reportedly led guerrilla activities against the Japanese occupation from the northern mountain. As a part of the personality cult of the Kim dynasty, the North has stressed the importance of keeping the country’s leadership based on the Mount Paektu bloodline.

Kim Kyong-hui, younger sister of the late leader Kim Jong-il, is also a member of the bloodline, and was powerful for many years. But she disappeared from public view after her husband Jang Song-thaek was executed in December 2013 for high treason. Some reports say she is dead.

Kim Jong-chol, the 33-year-old older brother of the North Korean leader, reportedly has health problems. Kim Jong-nam, the half-brother who has been living abroad in exile, is highly unlikely to be a successor.

Ri Sol-ju, the 25-year-old first lady of the North, appeared to no longer be the close political partner of her husband. When she made her public debut two years ago, Ri was seen accompanying the North Korean ruler in many of public outings. Now, Kim Yo-jong seems to have assumed that role.

South Korean intelligence officials, however, dismissed the speculation as “groundless.”