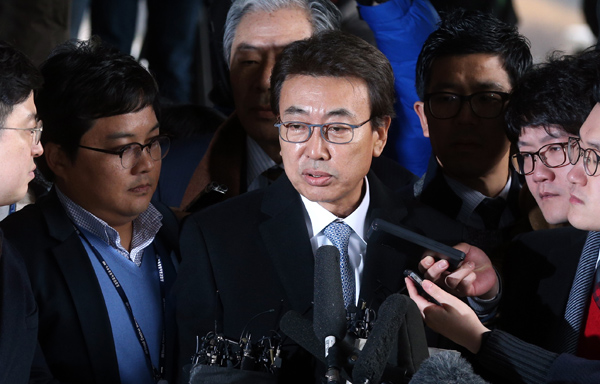 Chung Yoon-hoi, center, talks to reporters on Wednesday as he enters the Seoul Central District Prosecutors’ Office. Chung stressed his innocence in the back-room string-pulling scandal. By Kim Sang-seon

Chung Yoon-hoi, a shadowy former aide to President Park Geun-hye and alleged power broker in the back-room string-pulling scandal at the Blue House, appeared before the public Wednesday and stressed his innocence before going in for questioning by prosecutors.

“Who started this ghastly playing with fire and who danced along will be revealed,” Chung said before entering the prosecutors’ office. “The accusation that I influenced state affairs is not true.”

It was the first time Chung made a public appearance since a leaked internal report from the Blue House last month ignited the scandal. The 59-year-old Chung worked as Park’s chief of staff from 1998 until 2004. But little is known about his activities since.

He has no official role in the Park administration.

Quoting the leaked document by the Office of the Presidential Secretary for Civil Service Discipline, the Segye Ilbo reported on Nov. 28 that Chung had routinely met with the president’s key secretaries and tried to influence state affairs.

The report said Chung attempted to oust the president’s chief of staff, Kim Ki-choon, control appointments in the prosecution and pull strings on other political affairs behind the scenes.

Before entering the Seoul Central District Prosecutors’ Office Wednesday morning, Chung denied other recent allegations, including that he meddled in personnel affairs of the Ministry of Culture, Sports and Tourism.

When asked if he had a phone conversation with President Park, Chung said, “No.”

About 200 reporters gathered in front of the building awaiting Chung’s appearance. Chung appeared around 9:50 a.m. accompanied by his lawyers. After briefly answering questions from reporters, he entered the prosecutors’ office to give a statement.

Chung has formally requested the prosecution to investigate the Segye Ilbo on charges of libel. Lee Jae-man, the presidential secretary for administrative affairs, and Jeong Ho-seong and Ahn Bong-geun, personal secretaries to the president, who are named in the confidential report, also filed complaints against the newspaper for defamation.

At the same time, Chung is also a suspect in an influence-peddling case filed by the main opposition New Politics Alliance for Democracy (NPAD).

Chung’s lawyer said Wednesday that his client will file a suit against the NPAD on charges of raising false accusations. The NPAD responded, “Chung has become arrogant as the president issued a guideline to prosecutors on how to conclude the case and the Blue House is filing libel suits against the media.”

Last week, President Park rejected allegations in the report, calling them rumors, and defended her secretaries. She said her contact with Chung had been severed and that the entire scandal was “far-fetched.”

Prosecutors have already questioned Police Chief Superintendent Park Gwan-cheon, who created the report when he worked at the Office of the Presidential Secretary for Civil Service Discipline.

The office serves as an internal affairs arm for the Blue House and investigates corruption and irregularities throughout the government. Cho Eung-cheon, who headed the office and served as Park’s boss, was also questioned.

Earlier this week, the prosecution identified Park Dong-yeol, former head of the Daejeon branch of the National Tax Service, as their informant and questioned him about the report.

Prosecutors have tentatively concluded that no secret meetings took place between Chung and the Blue House aides, sources informed about the investigation said.

Prosecutors have yet to question the journalists of the Segye Ilbo who authored the exclusive reports that touched off the scandal. How they obtained the internal Blue House document and what efforts they made to verify the allegations are expected to be key in the investigation into the libel cases. The prosecution also planned to summon the Blue House secretaries accused of having met with Chung. Chung reportedly played a key role in hiring the trio to assist Park after she started her political career in 1998.

While the prosecution looks into the alleged maneuverings of Chung and Blue House secretaries, the Blue House is paying attention to another meeting allegedly headed by Cho, the former presidential secretary for civil service discipline. A senior political source told the JoongAng Ilbo that the Blue House looked into an allegation that Cho had met regularly with seven people including former and incumbent Blue House officials and a former senior official of the National Intelligence Service, a media executive and an investigator from the Supreme Public Prosecutors’ Office.

Sisa Journal reported in March that Chung had once hired someone to tail the president’s brother. Chung denied the accusation and filed a libel suit against the weekly magazine. The case is pending at the Seoul Central District Court and rumors recently spread that a power struggle has taken place between Chung and Park Ji-man. The Blue House suspected that the group assembled by Cho orchestrated the leak of the internal document that triggered the Chung scandal, according to the source.