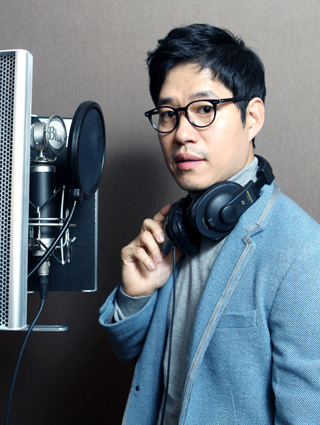 Actor Yoo Jun-sang is a chameleon. He has not only played leading roles in movies, TV dramas and musicals, he also published a book in 2012 and held an art show earlier this year to exhibit his paintings.

And once again, this talented individual has released a new music album after debuting his first last year.

Yoo worked with guitarist Lee Jun-hwa on “J N Joy 20,” which came out earlier this month. The multifaceted star also plans to have his first concert over Christmas.

The singer, actor, writer and painter met with Ilgan Sports, an affiliate of the Korea JoongAng Daily, at his music studio in Sinsa-dong, southern Seoul.

During the interview, Yoo stopped to sing some phrases while Lee played guitar and shared how he usually comes up with songs when he is traveling.

Q. How does travel inspire you?

A. I just make songs during a moment when I feel something. I’ve created a 67 songs in total. I asked [Lee] Jun-hwa to take out his guitar whenever I think of something in my head after seeing something with my eyes. He starts playing the guitar and I hit record on my cellphone and start singing. The entire performance is very impromptu. When a train passes by, the lyric says a train passes by, and when I see some clouds, then the lyric says I see some clouds.

How much did you edit these songs after recording?

I barely touched them. They are not modified much. I listen to a song I came up with earlier that day all night long. That’s how I come to memorize the lyrics and melody.

What’s the ultimate reason you do music?

I want to feel things in harmony with other people through music. When I first released an album, I barely did any promotion for it. I did that intentionally and, of course, I didn’t really get a response. I was thinking one day that someone would listen to it and then decided to do the second album.

I think more people found about it and listened compared to before. Then they even tried to look for the songs from the first album. I lose money the more I release albums, but I believe they speak to some people out there.

Tell us more about the upcoming concert.

I got an offer to do a concert from an agency. I will be singing the songs I sang in musicals during the first half and then I will sing some of the songs from the newly released album and other songs I have made [in the second half].

There are so many concerts being held by many other singers, How is yours different?

There will be lots and lots of gifts given out because it’s the first concert. That’s the difference. We have so many that it will make people wonder if the concert will [make any money.]

How do you want to inspire people with music?

I hope that young people will continue having their own dreams by watching me challenge myself with music. “Yoo tries at that age, so I can do it” is something I want younger people to think.