Abe’s win likely to keep Japan on its rightist path

Abe’s win likely to keep Japan on its rightist path 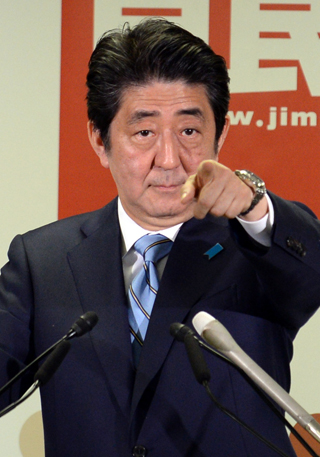 Prime Minister Shinzo Abe’s ruling coalition cruised toward victory in general elections over the weekend, which increased concern from Seoul and Japan’s other neighbors about Tokyo’s path toward militarism and historical revisionism.

Abe’s ruling Liberal Democratic Party and its coalition partner, Komeito, won a super majority in the lower house in parliamentary elections on Sunday, though voter turnout was its lowest since the end of World War II.

The ruling coalition now holds more than two-thirds majority in the lower house of the National Diet of Japan, giving it the power to override bills that are rejected in the upper house and then pass them into law.

This would leave Abe more room to push through with his agenda to amend Japan’s postwar pacifist Constitution and formally legalize the nation’s right to exercise collective self-defense.

Analysts in Seoul are concerned that Japan is more focused on celebrating the 70th anniversary of the end of World War II next year than patching up relations with Seoul ahead of the 50th anniversary of bilateral ties with Korea.

“In the past two years, through emphasizing its alliance with the United States, Japan has bolstered its strategic role and kept China in check,” said Cho Se-young, a professor at Dongseo University and the former director general of the East Asia Bureau at the Ministry of Foreign Affairs. “Through this electoral victory, Prime Minister Abe’s diplomatic policy will take on an even more distinct conservative flavor.”

He added, “Seoul had looked forward to Japan showing sincerity in repenting for its history as Korea and Japan reach 50 years of bilateral ties.”

But Japan may have different ideas, and it is likely that the two countries may end up “walking the same path, with different objectives.”

There is a “high chance,” Cho said, of Japan focusing on ending its pacifist postwar system and accelerating its military “normalization” process.

After his victory on Sunday, Abe told reporters that the Aug. 15 statement - which Japan’s neighbors are concerned may overturn Murayama and Kono Statements that apologized for Tokyo’s wartime aggressions - will include “repentance for the war ... and what sort of path Japan will take from now on.”

Abe also confirmed that he plans to take steps toward his goal of a constitutional revision.

Following a landmark Cabinet decision to allow a liberal reinterpretation of its pacifist Constitution in July, steps to legalize Japan’s rights to exercise collective self-defense are expected to play out in the first half of 2015.

Seoul has expressed trepidations about Tokyo ending its ban on collective self-defense, an integral part of its post war defense position, and requested transparency in the process, amid concern that Japan is returning to its militaristic ways without properly atoning for its wartime aggressions.

Rather, the Abe Cabinet over the past year has pushed for a revision of guidelines on historical textbooks to bolster its territorial stance and trivialized the issue of the Imperial Japanese Army’s sexual enslavement of women during its colonial rule over Korea.

“There is a high possibility that the Abe government, which has extended its powers based on its support from conservatives, will strengthen its attack on historical truths, including the comfort women issue,” said Cho Yang-hyun, a professor at the Korea National Diplomatic Academy. “The Liberal Democratic Party, likewise, has an uncompromising attitude toward territorial issues and may take a strong stance on the Dokdo issue.”

Korea is of the position that there is no dispute over its easternmost Dokdo islets in the East Sea, which Japan calls Takeshima.

“Our government, as we have proposed a trilateral leaders’ summit, will take a positive approach, but the Abe government will need to show efforts toward a correct understanding of history and advance amicable relations with neighboring countries,” a Korean Foreign Ministry official said.