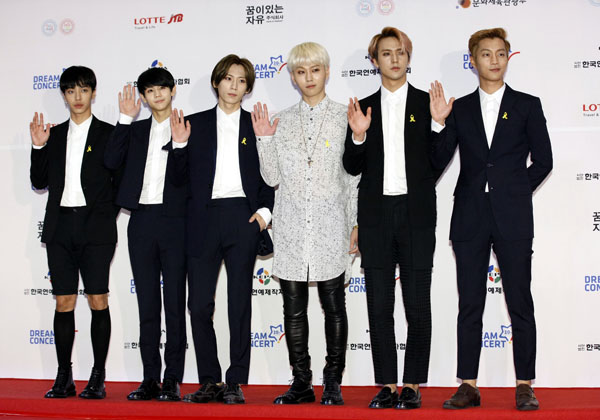 Prior to the 2015 Golden Disc Awards, which will be held in Beijing next month, Ilgan Sports, an affiliate of the Korea JoongAng Daily, will introduce girl and boy groups who have been nominated for the grand prizes.

B1A4, with its boy-next-door image, has had a good year, earning rave reviews from music industry insiders for its second studio album “Who Am I,” which was released in January. Eight of the 12 tracks were composed and written by the group’s members.

Each of the guys are also leading prolific careers outside of B1A4.

Baro appeared in the popular reality TV show “Youth over Flowers,” in which the singer and two actors hit the road to Laos, and Sandeul landed a role in the musical “All Shook Up.”

Jinyoung is pursuing his acting career. He appeared in the hit film “Miss Granny” earlier this year and was cast in a new tvN drama series that will start airing next month.

Beast, pictured below, also deserves to be dubbed the year’s best K-pop boy group for its non-stop changes. They began as a dance group in 2009, but this year the six-member boy group proved its members can also sing ballads.

Beast released two mini-albums in the last 12 months and ballads from each album became instant hits. Especially popular was “12:30 p.m.” from the “Time” EP. The track topped 10 music charts upon its release.

Just this year, Beast has grabbed 18 trophies and awards from music shows and charts.