Hints of a reshuffle surface amid scandal

Hints of a reshuffle surface amid scandal 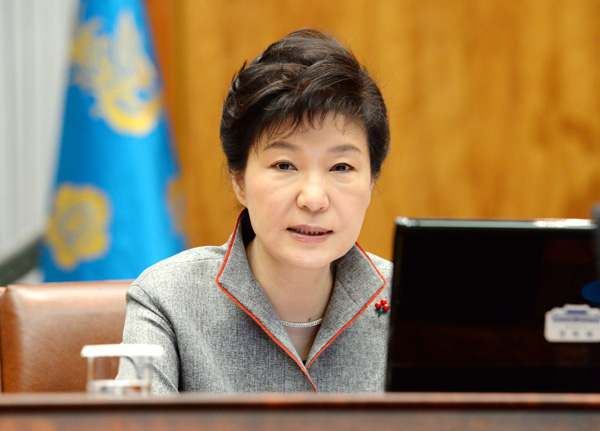 President Park Geun-hye makes her opening remarks Monday in a meeting with her secretaries at the Blue House. [Joint Press Corps]

Just three weeks after the Park Geun-hye administration became embroiled the biggest political scandal since its inauguration, some observers are already speculating that a major reshuffle could be imminent.

The Blue House found itself at the center of controversy after a local newspaper ran a report about an internal document leaked from the presidential office that claimed that one of Park’s former aides was intervening in state affairs behind the scenes and influencing key secretaries.

Some government officials have surmised that those who stand to be replaced may include the president’s chief of staff, Kim Ki-choon, particularly given that he failed to properly deal with the report after it was brought to his attention and focused instead on covering up its existence and its subsequent leak.

Circumstances indicate that Kim knew the report had been leaked far before the document was quoted by the local Segye Ilbo on Nov. 28. The internal report was drafted on Jan. 6 by the Office of the Presidential Secretary for Civil Service Discipline.

The report, based on an official investigation by the office, alleges that Chung Yoon-hoi, a former aide to President Park during her days as a lawmaker, has continued to wield considerable influence, discussing state affairs and human resources matters with a tight 10-member circle that includes three of the president’s secretaries.

“Public sentiment isn’t good right now,” a senior member of the ruling Saenuri Party said. “It is inevitable that President Park will have to resort to a reshuffle. Unless she tackles the situation in an appropriate manner this time, she’ll be hit with an earlier-than-expected lame duck period.”

He went on to pinpoint Kim as the first to be let go.

Another Saenuri lawmaker added that President Park would “definitely” carry out reshuffle, despite her reluctance to do so.

But neither lawmaker predicted she would sack the three secretaries mentioned in the internal report - Lee Jae-man, presidential secretary for administrative affairs; and Jeong Ho-seong and Ahn Bong-geun, both personal secretaries to the president.

The trio has kept by her side since 1998, when she entered politics referred to in the document as the “three doorknobs.”

The allegations concerning their influence-peddling is difficult to verify, and lawmakers contend Park would be hard-pressed to find legitimate grounds for their dismissal.

“Firing the three secretaries is no better than saying the president should quit her job,” one lawmaker said.

Political analysts advise that the president reflect on her style of governance and make necessary adjustments. Park has long been criticized for relying too heavily on a small pool of confidants - a habit that dates back to when she served as a lawmaker.

She is also known to prefer written reports rather than a face-to-face contact.

Yet, her “secretive” communication style has only contributed to snowballing rumors and allegations about a “shadow power” behind her, sources say.

Her reluctance or outright refusal to communicate with those outside her league was underscored by National Assembly floor leader Chung Eui-hwa’s accidental revelation on Tuesday that he had not talked to the president on the phone since he took office in June.

“I proposed that the president and the Assembly speaker launch a hot line so that they could talk anytime,” he said in a forum hosted by the Korea Broadcasting Journalists Club. “The Blue House gave me her phone number.”

But when asked how many conversations he had with the president so far, he responded, “Frankly I have never talked to her on the phone. … I tried to contact her twice but the phone was off both times, probably because she carries it in her handbag or something.”

Cho Yoon-sun, senior presidential secretary for political affairs, later apologized to Chung on President Park’s behalf and gave him the phone number of Park’s secretary instead.