Koreans eat most ramen per person in the world

Koreans eat most ramen per person in the world 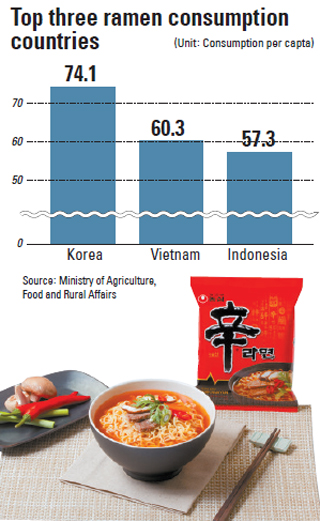 Korea consumes more instant noodles per capita than any other country, with 74.1 ramen packages eaten annually, the Ministry of Agriculture, Food and Rural Affairs said, citing a report by the World Instant Noodles Association.

Vietnam took second place, consuming 60.3 packs per person, and Indonesia was third with 57.3.

But for total consumption, China was the unrivaled top consumer, eating 46 trillion packs of ramen last year. The second was Indonesia, followed by Japan.

The most popular ramen by sales in Korea last year was Shin Ramyun made by Nongshim. Nongshim’s Jjapagetti, which are noodles with a salty black soybean paste, were the second most popular product, followed by Ansungtangmyun, also made by the company. Neoguri by Nongshim and Samyang Ramyun by Samyang also made the top 10 list.

Another noticeable change was the extreme drop in sales of white noodle products, which have a chicken soup base.

In 2011, ramen with a white broth changed the local ramen industry as an alternative to the common spicy red soup.

In 2011, white soup noodles took at least 15 percent of the instant noodle market. But this year, they account for less than 10 percent.

“It seems that people are going back to traditional ramen,” said a public relations official at Samyang. “Now, the most popular varieties are spicy tastes with seafood.”

Sales of ramen in Korea were worth 1.97 trillion won ($1.6 billion), and people prefer to buy ramen in large discount chains rather than at convenience stores or other retailers.